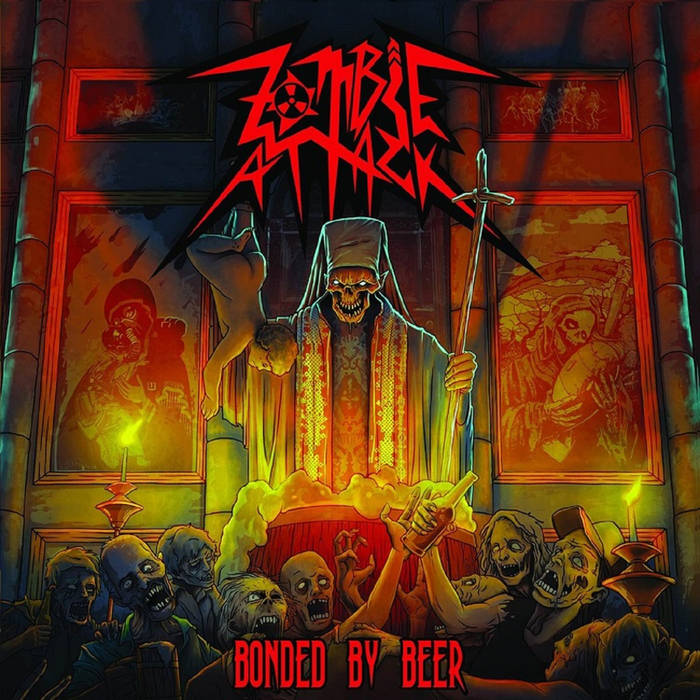 There seems to be a strong metal scene in Ukraine. From grind core, to death, black and thrash metal. Zombie Attack belongs to that last category. Their music style is shifting a shape between thrash punk and rock`n`roll, which is a crossover of these musical styles in one album. If someone told me that in song Bonded By Beer, Zombie Attack plays melodic rock`n`roll with leads a`la Motorhead, I couldn't disagree with that. They try to have choruses in their tracks, usually repeating song titles, so it`s nice to sing along with the band if you`d like to. It also happens in track called Hell Satan's Command. Song titles sound kind of humorous, as you can see, and it`s hard to not think of Tankard that do it similarly as this Ukrainian band. There are American influences in the music, song Satanic Barbecue is the one, performed in the vein of Anthrax. I think they have some good chords in music, many fast shreds and plenty of speed metal tempos. Here and there they play like Anvil, Terrordome, which means;Motorhead meets speed, thrashy riffs, and rock`n`roll guitar solos. I think that in most of their tracks there is always that one or two main leads that make me like the album. Another solid song, conforming my opinion is Anarchy 666. Want more thrash metal oriented song? Virtual Reality is certainly aggressive one, and vocals on the album are too.
Slave Doll is very fast and dynamic track. From time to time, rock`n`roll spirit pops up in their song writing, but has to be written that they always thrash!, also in track Hit The Road. Song title like Apocalyptic Rock'N'Roll says you what their music is about, among other things. They have one track with Russian lyrics and crazy fast music, it`s the one closing the album, which is Palachi.