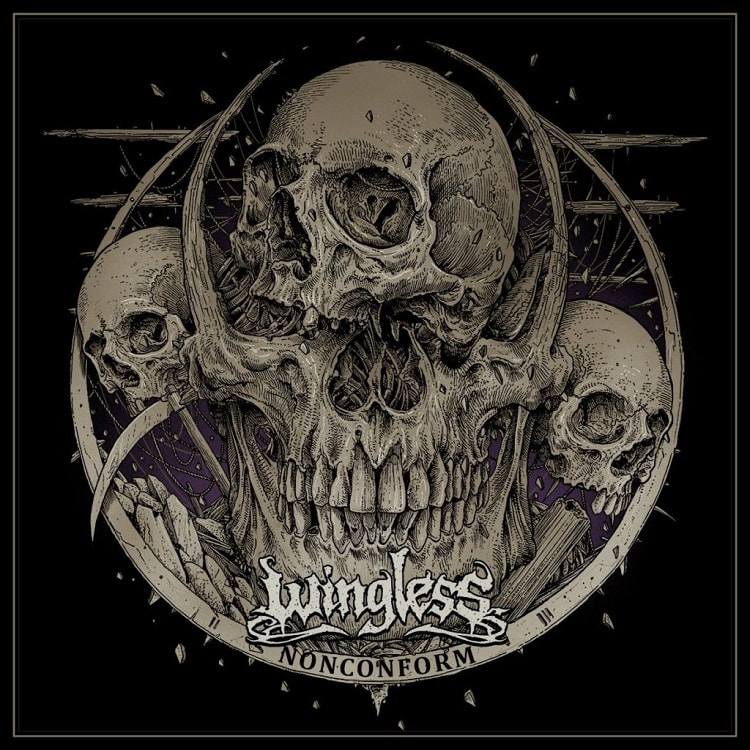 I need to confess that I was wondering if I play the right album of the band that I know from their first two releases (they play completely different music on those records), but apparently, Nonconform is their new (fourth) album as I found. The reason that the music has changed so much are new faces in the band. The only member left from original squad is guitarist Greg Luzar (he tracked down all guitars on the album). New members are Michał "Xaay" Loranc on vocals (also in band Redemptor) and Piotr Wójcik on drums. Wingless 2021/2022 is a death/doom metal band and the change is good, songs are very strong statement of their ongoing creativity. They did not try to complicate their music in the process of making songs. Tracks are written, typically for one guitar (right, they have no second guitarist, so during live shows they would sound more authentic, as they do on the record). Nice feature of the album is that bass and guitar have their own pitch and distortions, so there are sound differences that bring little more dimensions and depth in music, particularly in slower and spacey fragments of songs. Averagely, its middle paced album that very few times leans toward faster fragments. Nonconform grands super heavy, crushing riffs with dose of melodies. Album retains its darkness in lyrics, but quite frankly, there are also some bleaker moments in music itself. This record is a bulldozer made of heavy riffs, guitar harmonies, there is a lot of alluring groove in manner of death and doom metal (well, one track is more doom and stoner`ish, but Wingless always has been inspired by other musical genres as well). They even play some stuff that sound like old school death metal. Vocals are very death metal for sure - guttural grunts dive them into more brutal areas.  Drumming is really good - Piotr is catching a flow, atmosphere of the music as it goes and unfolds before him. Cymbals in first song sound very original - the drummer play his own tune within a tune (which is a song itself), so cymbals are  certainly not always a usual noise that we all can hear in metal music. They remind me bands like Memoriam, Gorefest, but they have some of that classic, British heavy metal riffs of band like Black Sabbath going on as well. I am glad that Wingless is able to keep my interest to their music, because every member of this band bring part of "himself" to the music, something individual and unique, and luckily, they all have met in point where music on this album WORKS as ONE!
Hit of the record for me is a track titled Imperceptible.
​Tracklist: