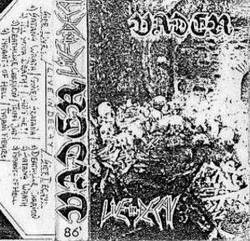 In recent months Vader has released their three first releases ever. Originally available only on audio cassettes later put out on one CD (Nercolust and Morbid Reich) but never on separate discs with awesome art covers to each of them. I have had Live In Decay tape 20 years ago and I could swear that my cassette had a better sound quality but do not know really as I can`t re memorize that back due fact I do not own that tape anymore. I have to believe that this CD edition is best the band could bring out of this old material. Lyrics are in Polish and it`s just so cool if I think about it. I believe this material, recorded live in 86 is in stores because of its popularity as a product of tape trading movement so much cultivated for about 3 decades in 80`s, 90`s and later. I do not think it was ever a purpose to put out this material officially. Anyway, this is for die hard Vader fans who like hideous sound, devil and blasphemy in lyrics.

The year 1989 is a debut studio opening for Vader. The year where the whole world had a certain problems to record proper metal album or demo tape as the producers and studio engineers back then were green and inexperienced in this genre. Despise all, Vader to the best of abilities has recorded a Necrolust.  The ground breaking demo,  death metal with possessed guitar solos inspired by Slayer.  This day every respected fan of worldwide death metal knows every track from this demo so many times re-recorded and newly arranged on followed up releases. No matter of other opinions those songs are killers on this demo. 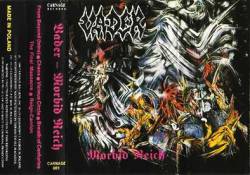 In 1990 is a time when I first heard of the band.  As you can imagine, happy smile on my face tells the story of my shopping that day when I purchased Vader`s second demo tape called Morbid Reich. The great opener as the story tells later on-the band`s key to Earache Records. Holy shit all the events that had place afterwords just confirmed that Vader successively burnt down every stage they have played on.  All those songs as good as on Necrolust became a base to Polish death metal as  finest as we know already.

As far as I can recall you can  make a single purchase of each disc. Even tho I recommend to buy all 3 together as you can get it and see that the spine of complete 3 CD`s show you full logo of the band other if you do it separately.I do not know the effect of cassettes and vinyl versions but you can easily check out for piece of mind.