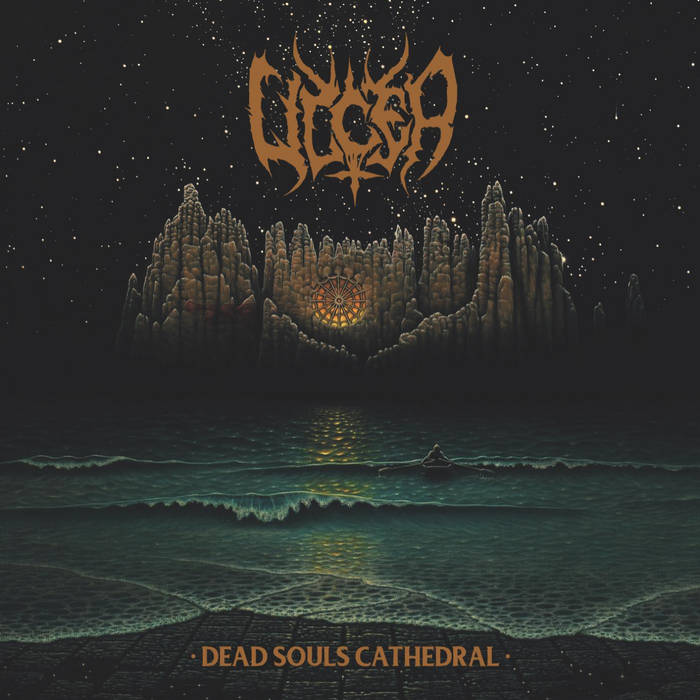 This is my first time with the music of Ulcer, although the band has already released several albums. Dead Souls Cathedral is a primal, old school death metal, black blood is dripping off the riffs of the band like a slime from the axe. Most of the songs are played at a middle pace, sometimes faster, but the drummer play blast beats rather occasionally and his focus is more on delivering solid drumming techniques (Autopsy), to strength the band`s rhythm section. So, the album is averagely not very fast. The music is between heavy riffs, powerful sound and asphyxiating, soulless atmosphere. The vocals are brutal, vibrating guitar solos roaring and squealing within high pitch tones (Vader) and it`s good to hear some guitar tapping, melodic solos that fulfill the thrilling space in their songs. They have a keyboardist who is shadowing the atmosphere of the record, but this instrument does not play a first role in their music.  Guitarists make it few times more melodic also, but the band is doing a good job by creating a creepy and gripping atmosphere, by just simply delivering monstrous death metal riffs, in the name of old fathers of death metal. Ulcer sounds like native, Polish death metal I know, in style of Dira Mortis, Eteritus, there is also some Swedish - Nihilist or Carnage very raw playing, but they also have Asphyx slowness and musical ideas that may start to creep in a dark corners of your mind as you keep listening to the songs. Instruments and vocals are low tuned, not very clean - some crunchy sound has been attached to the guitars and bass, which make their uncompromising death metal being incredibly crushing, for most of time.
It`s very old school sounding death metal album with powerful riffs and such studio production. If that`s your thing, they will take a breath away from you, like from a living man in nail-shut down casket. Do not expect miracles from this type of music, only death is real, you have no choice but accept the album as it is, and Dead Souls Cathedral is a solid crusher, evoking old days of death metal instantly.
​Tracklist:

1 Those Black Gods
2 Not The One
3 Cold Darkness
4 Eternal Night
5 Off We Go
6 Die With Us
7 Disintegration
8 Dead Souls Cathedral
9 Into The Chasm
Review by Slawek Migacz
​Added: 11.11.2021
Order at:
Defense/Metalshop