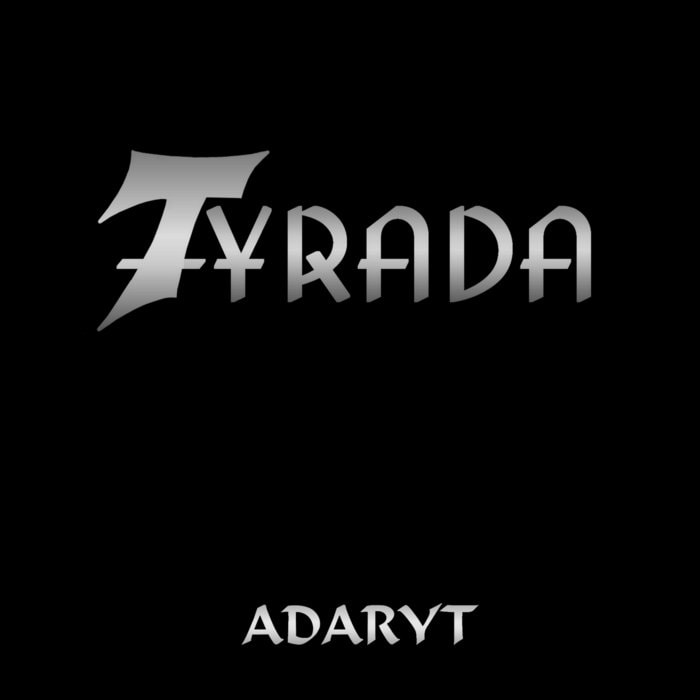 Tyrada is a young band from Lublin/Poland and they sound more like bands from Silesia region which is in the South Of Poland. It`s debut album inspired by classic Polish thrash bands - Kat, Turbo, Prosecutor and from the other hand - Metallica... Influence of Kat is quite obvious in songs Kanibal, Upadek and less in Konfrontacja but it is where the band smuggled some similar riffs from albums such as Bastard and Oddech Wymiarłych Swiatów (both are legendary albums of Kat) and threw them in, between their own music ideas for bewitching you all, unworthy listeners . If I`m not mistaken, both guitarists of Tyrada are brothers; Mateusz and Łukasz Kosnowicz. They do very good job on this album instrumentally. Most of the songs are in the style of old school thrash metal, which can be heard everywhere, but in Poland it is where such music sounds quite original and uniquely.
Fans of Kat shall find their new ground for discovery when they will listen to Adaryt surely.  Tyrada uses similar tone of acoustic guitars that remind classic Kat song -Lza Dla Cieniów Minionych in instrumental song Tchnienie and Machina. Tchnienie is a good track with violin and flute performed by guests who were invited to play on the album.
In track Nic, they reveal some  predispositions for playing heavy metal but actually the song turned out to be very good ballad. Other songs are dynamic and melodic thrash songs, guitar arrangements do not sound much explosive, just ingeniously good and interesting.
Singer sometimes accents some words just like Roman Kostrzewski (Kat), sometimes not but either way, Karol Koter vocals (in Polish) and lyrics are very well done and do not sound silly.  And yes, lyrics of Tyrada are influenced by Kat also, which are sort of enigmatic view on reality we live on and all what is wrong should be condemned.
It`s not much aggressive album, it`s more about capturing certain atmosphere into the songs by the band which emphasize the affiliation of their music to the eighties and nineties. I think they have succeeded in this matter. Their music is old school, more the way how they play the songs, less the way they produced the album which still sounds very good. If you are fan of Kat (second and third album), there is a big chance that you`ll appreciate Adaryt as I do.
On the album also played Krystian on bass and other Krystian on drums. I think the band had creative chemistry between them during recording process of the songs and that`s why the music came out so good in my opinion.
It`s not that great album as any Kat albums as yet but it`s close to it, it`s similar music direction they have taken, and I think that Adaryt is Tyrada`s very good offering for you all, including myself.
Tracklist: