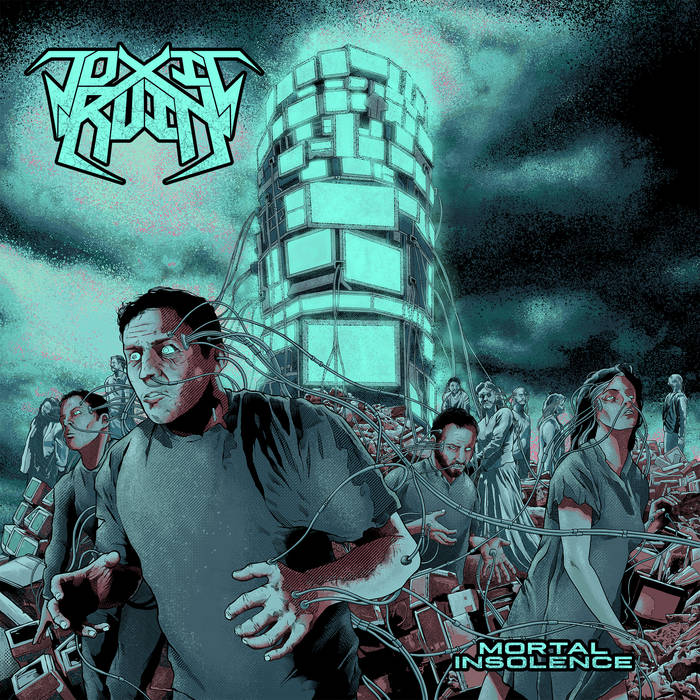 If Wisconsin area does not says you much then you should acknowledge that the place has and had some great thrash metal bands to strike your ears. If you are into thrash since 80`s and 90`s then names like Lazarus A.D, Morbid Saint or Realm does not sound new. But what sounds very new and fresh from that place is this, 4 songs EP from Toxic Ruin, the band that also has debut album out - Subterranean Terror, released in 2016.

It won`t be strange if I tell you that cover Crystal Mountain (Death) by Toxin Ruin is really well interpreted song by this band even if they sound more thrash metal. And of course, there are some prog and technical influences in this track as well as it is in original. I started out from this song because it connects them with Mental Atrophy which is a fast and highly explosive thrash metal track, also very aggressive and angry. There are some progressive guitar disharmonies and twists at few tiny spots here. Last 2 minutes of the songs are time for guitar solo, a pace is kept at mid range at this point and they play little bit more melodic but always energetic riffs.

Those guys are keep on going wild in Tyrannical Demise. Vocals on this EP are tearing it up and so they do in this track. The song is more technical and played a bit more tight but sound of this record makes it all perfect. I think that those heavier riffs in the middle of the track are pretty cool and build on some atmospheric cloud that surrounds the song.

Toxic Ruin plays their thrash in very modern way but their riffage arsenal is also very old school. In Insolent Obsession and in previous track, they have some fast drum beats but I would rather not confuse this band with death metal at all. As it happens in every other song, this one is super intense, has great technical moments on guitars and drums. They are a usually fast playing band with huge imagination when it comes to detailed ideas for music that arm and shape their songs into large guns that are their own songs - Mental Atrophy, Tyrannical Demise, Insolent Obsession. None of these tracks to be missed and  these ones are just unbeatable for now!

No doubt that musicianship of Toxic Ruin is top notch and Mortal Insolence is a must have EP for fans of Destruction, Exodus etc!