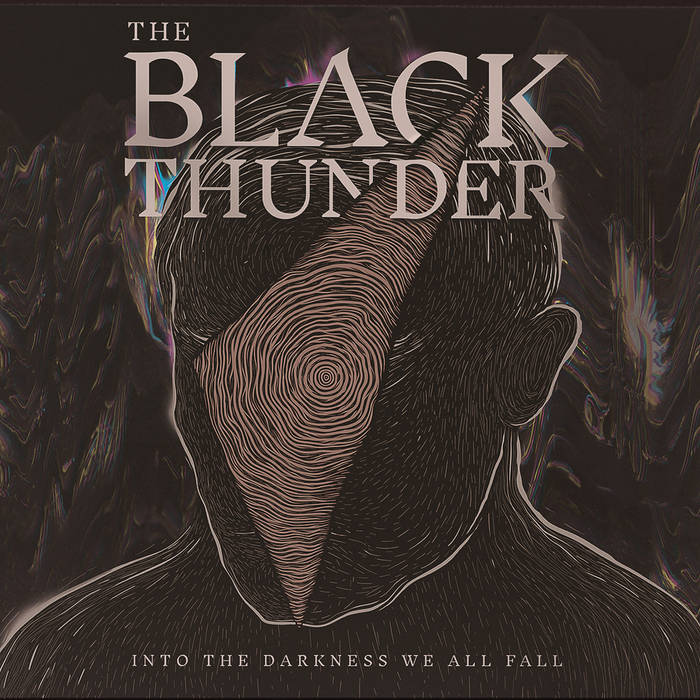 Quick look at line-up of the band tells me that The Black Thunder are ex or current members of death metal band Calm Hatchery. But do not be misguided by it. Into the Darkness We All Fall has rather nothing to do with death metal (those few blast beats in After a Downfall - Rise! do not turn the track into death metal song). Into the Darkness We All Fall is a sophomore album of the band that is hard to define to one specific genre, which do not bother me at all, never was. I think that diversity in their music is something that makes their songs a good record. Album is very groovy (We Are All Born of Nothingness), rock`n`roll vibe mixed with more classic heavy metal riffs, stoner and alternative metal. Lots of massively heavy riffs and melodies are dim light of the music, while negativity in lyrical content are their darker side. It`s kind of nostalgia than feeling of depression therein the lyrics that balance the music well and how you may feel indifferent many times, actually throughout the whole album. Songs come with some classic sounding riffs from the 80`s, like Sabbath, Candlemass, but it`s taken frequently toward modern stoner and doom metal rhythms (Pain Inside My Head). Album production is solid, whilst execution of music has both, a feel of present and old times. So, they quite do not give a shit where their creativity takes them, music is in constant crossroads between various but heavy music genres and songs are compact combination of simplicity and persuasive wave of riffs. Heavy guitar driven music, nice instrumental structures, along with melodies and catchy-sad moments in music, take you few times on the melancholic escapades where colors fade away as you ride through misery of life (lyrics).
Other bands that can be compared to The Black Thunder are Black River, Blacksnake, J.D Overdrive, Type O Negative. But I think the album has more optimism (music) than destructive pessimism (words) in its content.

And hey, I was able to pick up the songs that turn me on the most: Everybody Lies is like a flesh and blood - heavy doom, stoner, Self Destruction (the vocalist sings a bit in a grunge style, just like in this impressively laid song, vocally). I like the calm, endearing, instrumental track Everlasting Search for Inner Peace (title says it all). Flowers on My Grave is both a calmer and furious piece. When the singer sings the title of the song, it gets very funeral dark.
​Tracklist:

1 Everybody Lies
2 Self Destruction
3 We Are the Evil Masters
4 Pain Inside My Head
5 We Are All Born of Nothingness
6 Everlasting Search for Inner Peace
7 The Sun is Falling Down
8 After a Downfall - Rise!
9 Flowers on My Grave
Review by Slawek Migacz
​Added: 02.11.2021
Order at:
Defense/Metalshop