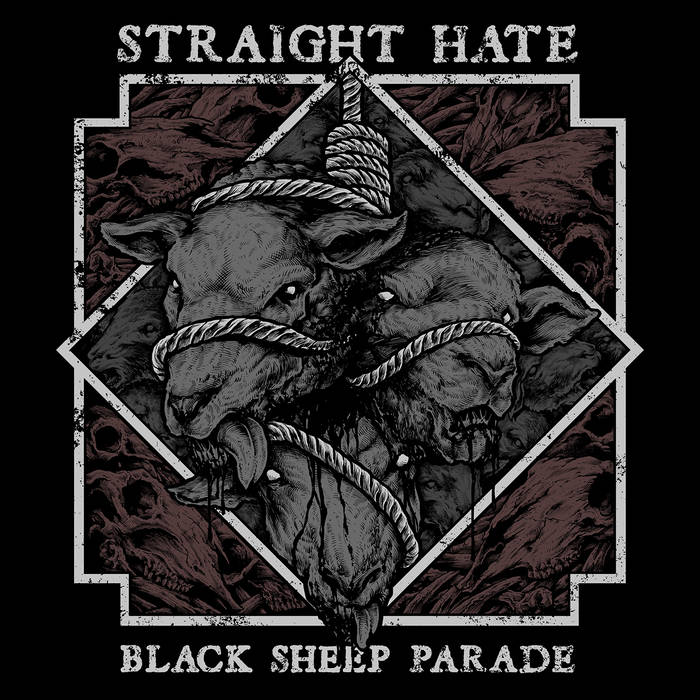 Straight Hate is in my top 5 Polish grind core bands. This conclusion came to me after I`ve listened their debut album Every Scum Is a Straight Arrow.  Now, it's time to face their second full length which has very good studio production on it, and the songs were recorded in several locations, not just in one.

There are 16 songs on Black Sheep Parade that I divided into categories to point out what` good, and what`s not so good on it.

These are usually fast (but not always) tracks with many drum blast beats. Relentless brutality of  it and noizz, squeezes a brain like a lemon. They play here like many bands have already done so, during last 20+ years. The only song that is fast but has a bit more creative spark is Above The Law - sort of black/grind core track which sounds quite original compared to other songs. My point is that, I know that grind core is usually a mean genre with no borders when comes to extremity but, I would expect to hear some music from it, if you know what I mean.

These songs combine the common grind core elements (fast and slower drumming, 3 way vocals, and solid melo-grind-punk guitar rhythms with groove moments (very important they have it). And there is something relatively fresh in Black Sheep Parade. For me, it`s their death metal based sound.
Groove moments in these tracks are well measured with brutality which is often climax of songs, where these songs finally start to feel like music with little more depth that I am able to open my mind to.

3. Seeking for next level.
​
The less drum blast beats (good if they have it a little), the better the songs in my opinion. In tracks 4, 11 (second half of the song), 16 (I think it`s best ever piece of music written by SH), the song writing is on band`s best level because the guitar groove is amazing, which brings quality, which blow my mind.

Straight Hate still sounds like a younger brother of Napalm Death sometimes, but Black Sheep Parade is a step forward in comparison to previous album. It`s a grind core that has mostly good songs on it that do not sound like that many other grind core albums. I believe it progresses the band to desire music direction but direction they have taken now is my desire that I have been seeking out for.

Black Sheep parade is a bloody good grind core appetizer with killer sound and I am glad to sense that Straight Hate is becoming a better band as time goes by.
​Tracklist: