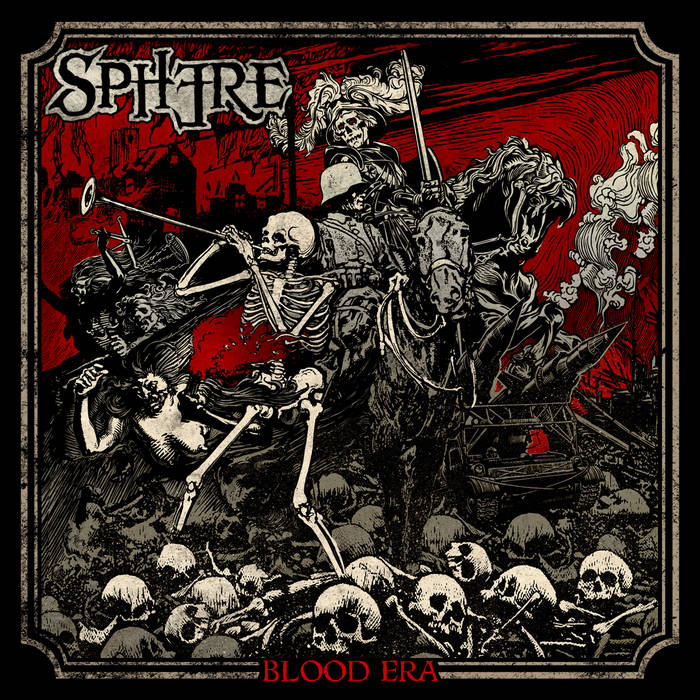 Well, it is already the fourth album in the achievements of Sphere from Warsaw. The band allowed themselves to invite some distinguished guests to participate in this new death metal massacre, which is album Blood Era. In the song Conquer The Christians, ex Vital Remains musicians Damien Boynton and Dave Suzuki provided the attributes of their death metal craft into song-writing. Damien used his cruel vocals, while Dave played a great guitar solo.
So, Conquer The Christians is a song by Sphere, but rooted in the style of Vital Remains, Deicide, Angerpath. It`s actually a really good, devastating death metal track. The album is preceded by the song The Age Of Contempt, which the band plays with heavy death metal harmonies and hellishly fast blast beats. Normally the vocals on the album are efforts of V, whose hideous growls (Scars Of Sanctity )are like some kind of sonic weapon, although there is also a bit of excruciating screeching screams (Nails) that also remind me those of Suzuki`s when he was in Vital Remains.
The album has very good guitar solos played by Paul of Sphere. I must admit that the guitars sound very brutal in the songs, and in addition to sometimes typical (Icon of Sin), fast death metal play, there is also heaviness and amazing guitar groove that make this album sound modern, fresh and interesting. The album is both a bit technical and simple at times, with a frequent change of pace, but the songs are intelligently put together. Killer-sounding bass in the end of track Heralds Of Pestilence or systematically pummeling drums in technical death metal song called I Am Death Incarnate, it all show off the sound and musical diversity in many songs of the band, such as Blood Era... . With everything that death metal has in its guts, album also feature some spherical, space keyboards (Nails...) that kick in tracks from time to time. It does not change a thing that it`s brutal, hammering death metal album that strikes with sonical extermination, but also has to offer some atmospheric moments (Scars Of Sanctity) along with impactful groove (it is not only about shredding in death metal anymore...)
​Tracklist: