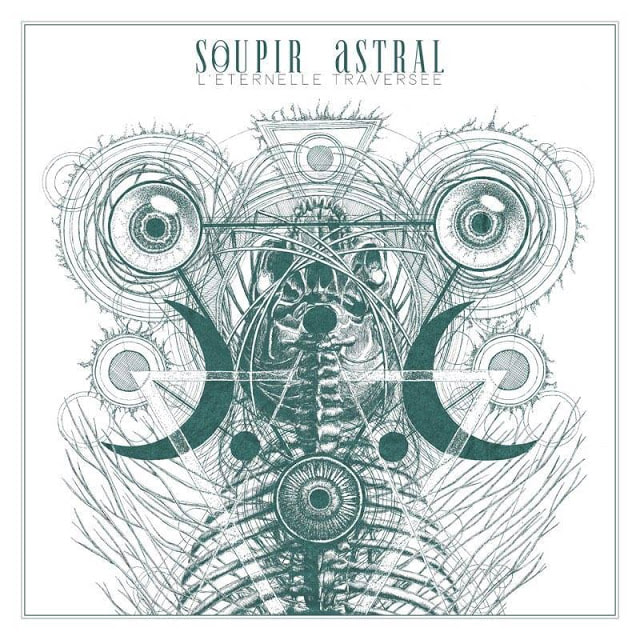 ​The debut album of French post black metal band Soupir Astral consists of 7 songs, including the intro Lueurs Incandescantes; (fire, wind, nature)...
The band's sound is very clear and distinct – strong drum beats and slightly audible bass lines accentuate the rhythm section of the band as if they wanted to stimulate the music heartbeat from its dormant deadness. Album is well balanced,  songs have guitar distortions and have not which, give the album a better flow and it`s easier to identify with the band's music.

Guitars in Déchéance Abusive sound atmospheric, but also (deep) pressing - Soupir Astral play here and sound more post black metal.
Sometimes the echoes of faster, aggressive black metal is also audible, like in Astral Light, where the guitar work and vocals from a singer sound like a minor, raw black metal style...
A calmer musical landscapes can be listened to, in a very good, instrumental song Vent Du Nord.
A more instrumentally elaborated, bleak sounding song is Le Dernier Voyage where guitar harmonies intertwine with simply approached doom metal moments.
The song Abandon is another step of the band towards playing slower, atmospheric music with emotional vocals - which performance, in a similar manner can also be heard in Déchéance Abusive.
Fin Du Chapître is a great, instrumental ending to the album - there is a kind of delicate piano touch and drum beat that sounds like a human pulse ( I do not think the band meant to be it like that), it is not known whether it proclaims life or death....
​Tracklist: