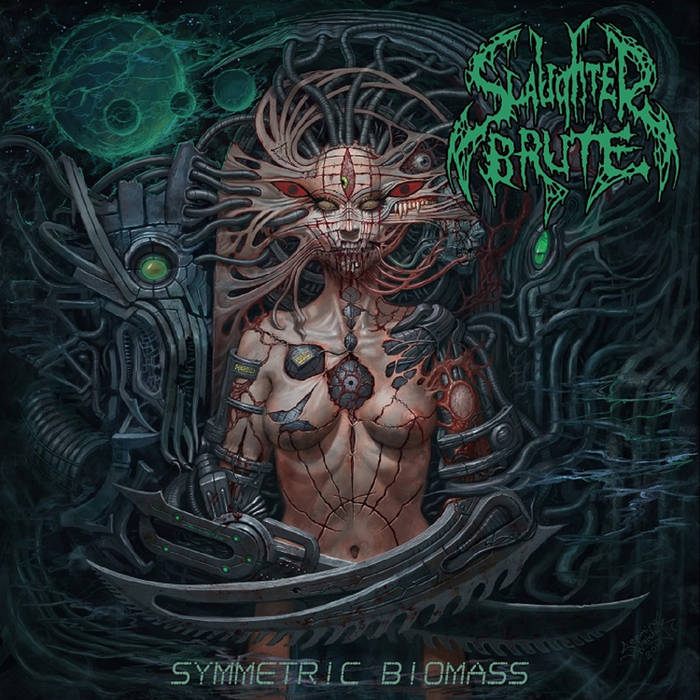 Symetric Biomass is a third album by Ukrainian Slaughter Brute. There is a 9 years hiatus between this record and second album Systematic Transmutations, which was released in 2012. I have not heard their music before, but Symmetric Biomass sound like they wanted to made a perfect songs. What they came up with is a technical death metal in the vein of Cattle Decapitation, so, those songs sound sometimes ridiculously technical, but not as often as it is happening in many other, modern death metal albums. Second side of their music is brutal death metal, with some Suffocation influences going on. Slaughter Brute has songs where they play decent technical death metal where they use many intricate guitar techniques and blast beats while intensity of music is fairly high and brutality of music is captured in clarity of sound. However there are those 2-3 tracks where guitar riffs and sound of bass find a special symbiosis with other instruments.  Their music experimentation sound like their explorations in seeking interesting music ideas, generally succeeded in form of the songs that have plenty of riff and pace changes. Basically, music of the band should meet expectations of fans who would die for technical death metal riffs, moreover, the band keeps this sphere interesting.
Arrangements and structures in their songs are generally solid, sometimes predictable, sometimes not. They usually play something that I already have heard in performances of other bands, but it does not bother me much, because many of their unconventional riffs are usually entertaining. It`s basically this kind of album where some traditional death metal riffs are mixed with modern visions of extreme metal.

If you look at track list, you will see there a cover song of Pantera. Ukrainians made their song Slaughtered, very in the vein of technical death metal, so it does not sound like original at all, but good for them, the track sound like Slaughter Brute. Of course, it`s fine feeling to have, when hearing those Pantera riffs in this album, which are classic ones and have been so inspiring for other bands and fans in the 90`s.

Symmetric Biomass is a modern, technical death metal album. I like music more than "filtered"production of this record, but it`s definitely album with solid songs.
​Tracklist: