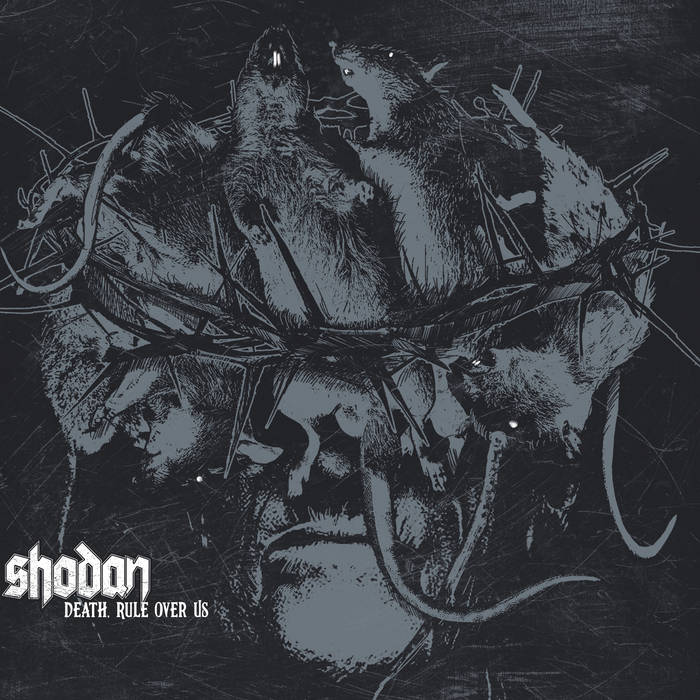 The new album from Shodan is a death metal one, with minority of technical and melodic arrangements for guitars and a lot of groove.

Song Fuel To Grandeur grabs my attention by some sublime music structures and complexity, which they have in songs, but only to a degree where music does sound reasonable. Fuel To Grandeur was the band`s well deserve single (really strong track-some vibe from Satanist album by Behemoth), promoting the album before its release and I like the idea of not playing too much drum blast beats by them on the record because my comprehension of their death metal songs do not stop on thinking about this genre only when listen to their music. For instance, song I Have Crowned Myself works perfectly for both death metal and progressive metal with few guitars that sound very similar to gods of the universe Voivod.
Many bands play like Behemoth or Vader out there, but there is another wave of Polish death metal that sound like Decapitated, Banisher, and I think Shodan belongs to this third wave too, they all play more sophisticated songs that stylistically are going beyond traditional death metal stereotypes. In track Primordial Incest by Shodan, I can hear many Decapitated influences by guitar work, or guttural/sore vocals that characterize common death metal style of these Polish bands. At the same time, the song is more brutal than other ones in the album, but in general, Shodan is oriented on crafting and progressing their music in manner of exploring these worlds of creativity until they find an inner energy in their music which is not as when listening to typical death metal albums.
In Doomsday Melody (this tile actually describe well, a type of melody that this album has in its songs), first part of the track is fast and groovy. In second part calmer moments and spoken-whispering vocals do not quite clicks for me but in third part of the song, simple guitar pattern sound pretty catchy. The song ends with some progressive arrangements and guitar solos that show off that the band can play some amazing, well crafted songs. So, Shodan has the vein for playing some progressive music and they exposed it well in their songs not once. For me, it`s the groove what makes this album sounds like modern death metal album, pretty much. In track Ray Of Darkness, the band has started off playing slow, and then a bit more aggressive, and faster, and it`s cool to hear that they are able to change music pace so they do not fall into routine.

I write this (even knowing that it`s impossible to merge music like that): 70% of every song on this album sounds really good, 30% - it's a kind of loss of musical fluency or a good momentum by the band, so, I think these numbers say that it`s their best album yet.
​Tracklist:

1 Breslau
2 Fuel To Grandeur
3 Doomsday Melody
4 Ray of Darkness
5 Primordial Incest
6 I Have Crowned Myself
7 Death, Rule Over Us
Review by Slawek Migacz
​Added: 10.06.2020
Order at:
​Deformeathing Productions