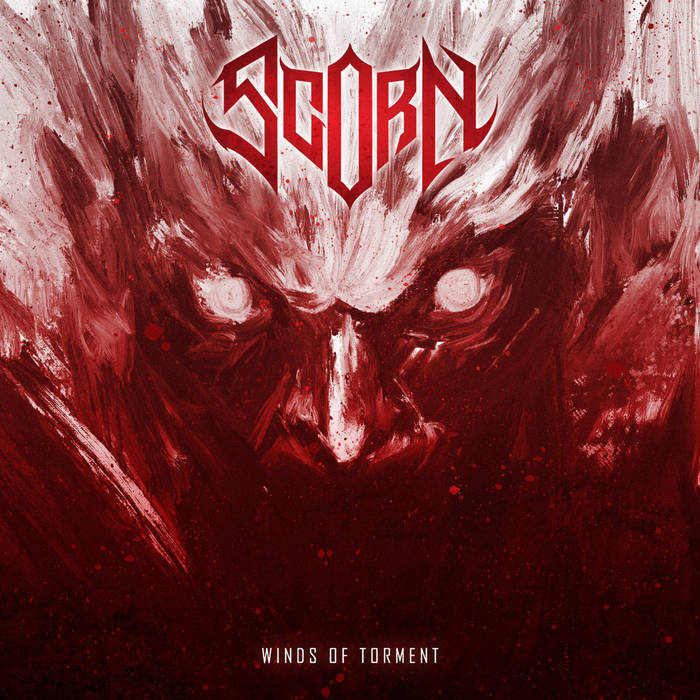 Scorn (Fra) is: Guillaume - guitars, Rob - Bass, Tony - drums (ex RED DEAD), Manu - vocals (DEATH FROM ABOVE / ex CAN OF WORMS). Many of these bands you`ll find out in katalog of Grat Dane Records.

For me, Winds Of Torment is a challenge of musical level. It`s an intricate (Resilient, Winds Of Torment) death thrash album where the musicians level themselves up technically (Let Me See Your Blood, Deathstroke And Agony), and where intensity and pace often change. One-off play of the album is not enough to catch all the flavors and nuances in their music, so I keep on playing the songs and discover new exciting elements that I missed out before. Music of Scorn is often twisted, fast and genuinely harmonized by guitarists who combine technical death thrash intensity with chunky riffs (The Horde). Although it`s not always fast, track like Despondency unveils slower and heavier pace of music where bassist has more space to show off, and guitarists revel more in Cannibal Corpse riffs and guitar tapping. It surely diversified tempo of music by Scorn. Songs are flooded by tons of guitar shreds that keep tensity of music within no-borders of aggression, brutality (The Urge To Kill, Sentenced To Live). Music of Scorn is fresh, sharp and very energetic (Drapping Veins). Along with complexity comes guitar hooks, fair amount of melodies and musical layers/passages that boost the energy of music and put the name of the band on my list of bands that play killer riffs.
I like how Scorn has balanced the songs and their character between thrash and death metal. so they gained quality of both styles  in their expression of music.
The production of the album is modern, but I have to say that musically they remind me of bands from the 90s, such as Krakkbrain, Droys or Agressor. Scorn maintains good traditions of that "brain metal" and it`s the album that may not be easy to listen by everyone, but at least me, their songs turn me on.
​Tracklist: