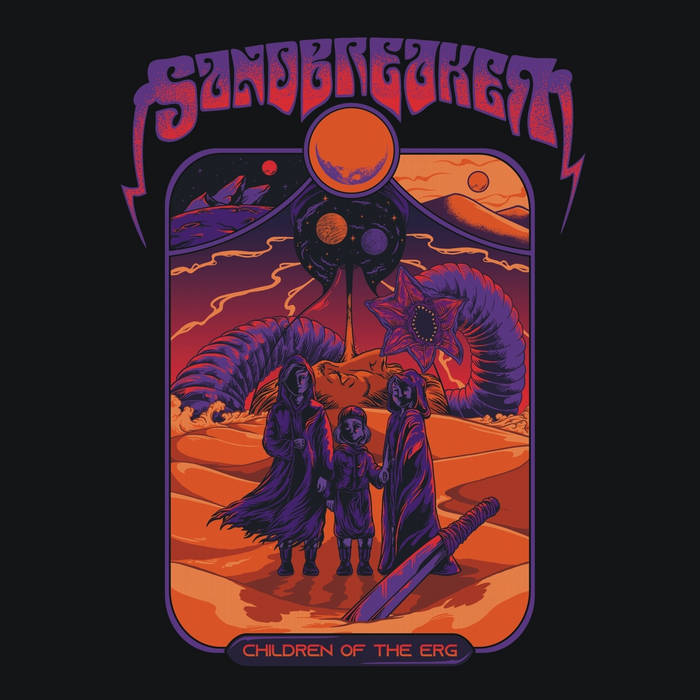 Evey year, Sandbreaker brings some new songs. One full length album and 2 Eps within 3 years mean that the band does not let themselves be forgotten. I used to it and I like such regularity. Their songs are super ordinary, at the same time, their slow doom / death metal is getting better, little by little every year.

Children Of The Erg is so gravely heavy song and guitar sound is so muddy that is almost define their style of playing.The track goes with some melodies played by lead guitarists and as for a slow doom metal record, the song doesn't last long. Actually, total time of the Record is only 13 plus minutes, which tells you that they condensed and used well their music ideas wisely in those 4 tracks.

Opening track is good, but in my opinion Sand Thrower which comes after is better or actually is best of the EP. Vocalist found a way to growl with  melodic line that he created for himself, but either way, his voice stays brutal . Rhythm guitarist plays more catchy in a first half of the track, in a second part, they ravel more into hopelessness of doom metal riffs, however they finished off the song more brightly again.

Next is Smugglers Of The Spice. The song is slow and heavy, beside regular beats, I noticed more drum activity, but the whole record sounds and was played very old school by band members . I think that is is also more stoner/sludge/doom type of song but it`s hard to tell a difference.

Sombre beginning in the track Walk Without Rhythm is nothing like what comes next. Heavy storm of guitar groove is like necropolis of sand, dust, mud and dirt in the vastness of universe...Hope that I do not need to remind you that music, album covers and lyrics of the band are inspired by Frank Herbert novels.

It`s very crushing material, vocals are  low tuned and have a creepy vibe - like it or not, I think it fits a depth of their music better than well.

After 3 years of knowing Sandbreaker, I still admire this band and their songs!

1 Children Of The Erg
2 Sand Thrower
3 Smugglers Of The Spice
4 Walk Without Rhythm
Review by Slawek Migacz
​Added: 18.10.2021
Order at:
Defense/Metalshop