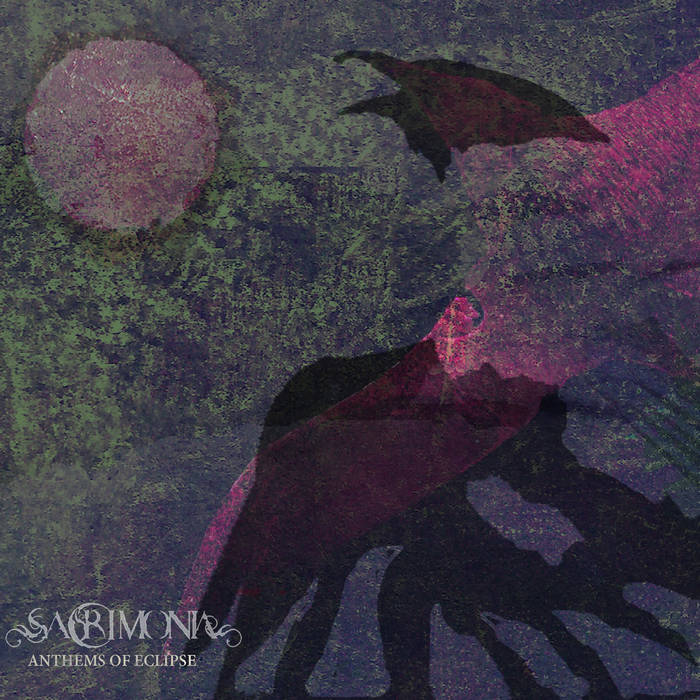 Anthems of Eclipse of Warsaw band Sacrimonia was released on June 10th. This is their debut album, but not the first release. In 2016, the band released the EP New World Ascension.

What I'm dealing with on the album is symphonic black metal, but of course not played with an orchestra. However, the massively present keyboard instruments in Sacrimonia's music is so convincing that for a moment I wondered if the band, by any luck, had not recorded this album with a symphony orchestra... They did not, but it was just a sign for me that the band had done good job with their symphonic-like elements in music. Keyboards sound very atmospheric in layers, dense, sometimes they sound like strings or take other orchestral forms. All to all, everything sound as powerful as it should in a mix.

Sacrimonia plays black metal with melodic riffs. Their songs sound dismal in faster parts, doomier in heavier parts (A Storm I Seek). Album has plenty of spacey groove (For The Universe To Shatter), guitar harmonies and melodic guitar leads. Worth to mention that some songs has its catchy moments as well. The atosphere of the album is dark, gothic, where music (its spirituality) seems a reminiscence of renaissance era. Sacrimonia has female fronted vocalist who really drives the music of the band. She has impactful range of vocals, from black metal shrieks to occasional screeches, and she is the venom of the band, for sure.
My favorite tracks are Mirror For The Faceless (bombastic and melodic black metal - great introduction of the band if you haven`t heard their music yet), Into Darkness My Soul Descends on the other hand is a predacious song, with atmospheric guitar groove, nice guitar solo and more complex music ideas. Katabasis also  shows off their talent when comes to song writing. Their music also feels right in slower sequences, which is the track entitled A Storm I Seek. Sacrimonia has songs where they weight in between aggressive black metal and atmosphere, which is track like Modern Prometheus. Very bewitching vocals,  and some musical drama is in the track Eclipse.
I think Sacrimonia is heavily influenced by Dimmu Borgir, particularly some intros before the songs are (Distorted Simulacrum, Into Darkness My Soul Descends). I can hear this inspiration very often on this album. I don't know if it's whether good or bad, but I know that as long as the album is interesting, as this one is, it probably doesn't matter ... I like symphonic black metal, this album is their best yet, although I am sure that they have a musical potential that they have not fully shown to the world at this point of time. I like Anthems of Eclipse. It is better than some older Dimmu Dorgir albums.
​Tracklist:

1. Distorted Simulacrum
2. Mirror For The Faceless
3. Modern Prometheus
4. For The Universe To Shatter
5. Into Darkness My Soul Descends
6. A Storm I Seek
7. Katabasis
8. Eclipse
Review by Slawek Migacz
​Added: 21.06.2022
Sacrimonia Bandcamp