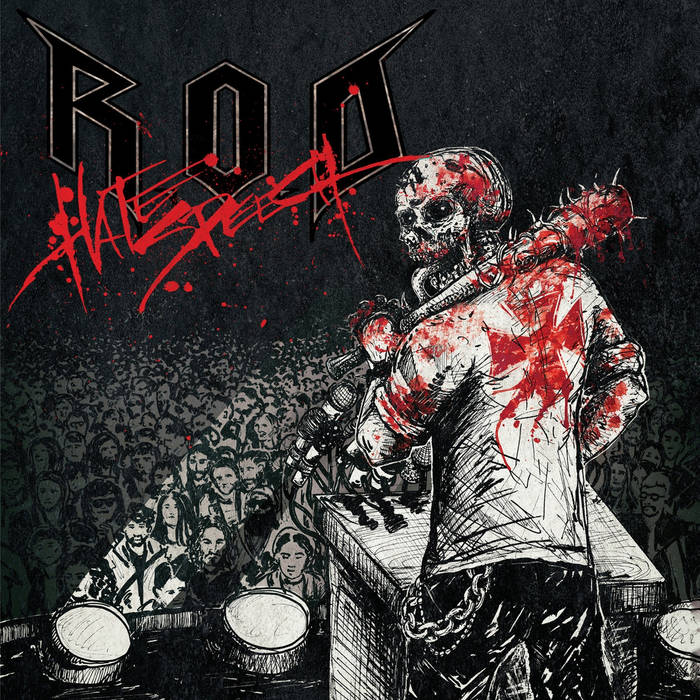 R.O.D. (POL) returns with 10 insanely fast and aggressive songs that last only over 24 minutes, but the dose of intensity in their music makes me feel like listening to a full-length album, which, by the way is treated like one. The band is known for their short compositions, and as it was on the previous album (#SocietyKill), they continue doing it on Hatespeech, with music that consists even more hate and power than before. For me, R.O.D. is the thrash metal, it`s about energy, thrill coming from a danger of speed and when breaking its limits, and about constantly punching riffs. Guitar  riffs and crazy drumming just ram everything before a big explosion (I count every track here as a single explosion to satisfy my hunger that is coming from them). This album is mainly about short, slashing riffs, well played technically. I think that guitar solos are quite good in songs because guitarists use a vibration thing (you know, in the vein of Slayer), so, I think that instrumentally Hatespeech is quite an entertaining album that exhausted me, even after 24 minutes of listening to it, and I mean in plus.They have short death metal moments in tracks, but still it`s pretty much the thrash metal album, just hitting more brutal notes than thrash usually does.
To be clear about what I like and dislike in thrash are vocals. I prefer clean vocalists ,raspy vocals, or the ones that you can`t confuse with any other bands, and this album does not really has any of it, at least not much. Vocals recorded for Hatespeech are just brutal, death metal`ish, vulgar, agitating, hating for hate, mainly just verse to verse growls without melodic or catchy moments that thrash requires. It`s ordinary, decent staff, but it is not what I look for in thrash metal. I think their music is so brutal that they do need to kill it with insanely brutal vocals either.
This album has good songs! Among fast and little chaotic tracks, there is slower one to take a breath. The band's music makes me feel like I was thrown off the plane on a seat with no seat belts. Their brutal thrash is irascible, really it`s like being in a middle of crazy circle pit, just, you know, not everybody is be born with a voice like Sean Killian when comes to singing...
​Tracklist: