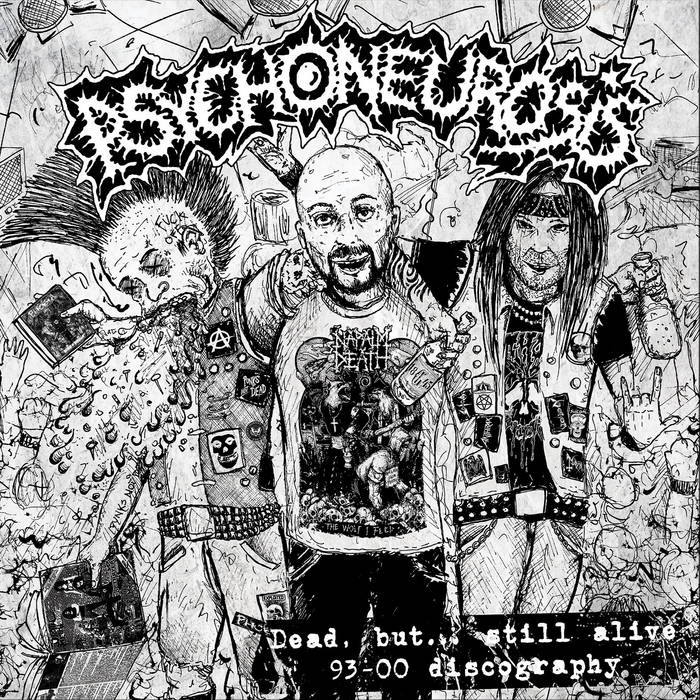 ​I remember this band of being literally in hundreds of various zines and magazines all over Poland. It was in 90`s era from which I recognize Psychoneurosis. I am not sure if I heard music of the band at the time but even if I haven`t, now is a chance to change it. This album is compilation of demos, EP`s, basically small band releases that cover some periods of time between 1993 and 2000. It`s rare opportunity to have a part of band`s discography on the disc, which is important part from their early days. Psychoneurosis are into extreme grind core, and they are known as Polish veterans of that scene.

Tracks 1-15 taken from 95 MC-demo called “Asylum For...”
Beside a blast beats that they have a whole lot in their music, they are more grind core toward punk than grind core toward death metal. Simple, brutal riffs based on some melodic music ideas is definitely what make them sound more like classic grind core/punk band that sticks to middle and fast music pace. Demo has reasonably good quality, chaotic growls and scream-noizzy vocals. Music has some vibe from Scum and From Enslavement To Obliteration albums of Napalm Death but Psychoneurosis owns the music identity without a doubt. For me, best songs of the demo are The Mark, It`s You, but overall it`s very strong release from them.

Tracks 16-35 taken from 98 demo “C. S. D Z. N.P.
This demo is a grind core blast, it happens very brutal if they play it fast. Of course, classic grind core vibe stays the same, only vocals now sound more punk`ish with less growls but still, with those schizo-screamo-crazy vocals. Lyrics of the band hate reality of post-communist Poland and they are mean as hell about that shit - they hate it to no limits and to the worst of meanings. I have to admit that drummer of Psychoneurosis plays insane cacophony of sounds. In one or maybe two songs they humoured me with funky-grind core bits which really sounds pretty cool. Demo production is fairly good, all music material is a bit too long, but no problems to focus and enjoy the most of music.

Tracks 36-42 taken from 7” EP, released in 2000.
Now, they sound as grind core band that plays toward death/grind. More brutal, more menacing music than before which indicates that there were better studio places around that time where they could record their music with more massive sound. Vocal transformations in this EP turns to be totally sick. Because of their music that sounds more hideous now, they remind me band like Dead Infection but there are many moments that I can recognize that old Psychoneurosis style that they just blend in, around their extreme sound. Agathocles cover song should give you a clue what this EP is about...

Songs 43-46 taken from Following Days Vegetation which is 2000 split 7“ EP with Brutal Insanity.
It's a thick and gross sounding grind core with chaotic sound and music. 3 quick songs with a few slower fragments are not their best achievement, but if you are looking for a brutality that can screw you up quickly-maybe for better times, then maybe you will get it

Tracks 47-50 taken from 93 split tape with Grossmember.
It`s a live recording with shitty sound quality from the tape. It is what it is but you know, people liked it in old times. The same people, as well as new ones, they like it nowadays so, why not....

In my opinion,the band's best period is "Asylum For ..." A really good grind core on this demo. They sound here like Psychoneurosis and not that much like other bands. On those various releases, they captured that unique vibes of that old times which are impossible to evoke nowadays because we live in different times...Every attempt to do so would be only cheap imitation of it. And that`s why you get albums like this one; to keep memories of that times as real as they were.
From musical, collector and historical point of view, Dead But...Still Alive is the compilation that you should definitely have.
​Tracklist: