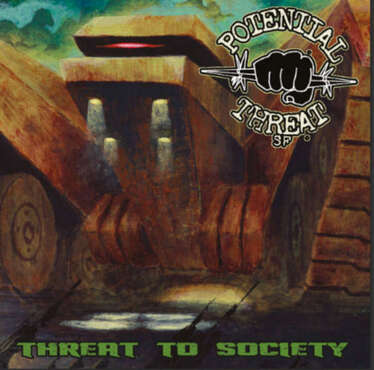 Potential Threat SF is San Francisco band and you should already know that they are Bay Area thrashers! This is the region that has been well known for decades by this style of metal. It`s not a new band for me. From the past, I remember them from their song Destroy And Dominate.

Threat To Society is packed up with many changes in pace of music but usually, expect them playing fast (if not, then they just sound heavy as hell). You will hear some technical moments on the album and lot of sharpened to the maximum riffs  (Cry Of The Wolf, Don't Look Back) that shall  rip you your brains apart.  The album is superb aggressive & energetic (tracks Raise Your Fist and Preemptive Strike should please fans of Master Of Puppets) and the songs are charged with quality bass (Path Of The War Machine) and drums arrangements while guitar riffs are explosive almost in every minute.  They mix melodies with massively destructive shreds (Root Of All Evil, Into The Black) on 6 strings and with old/new school vocals. Potential Threat SF plays top guitar solos in their tracks to embrace their song-writing which I think is really amazing.

Singing implicates grand-aggressive vocals from the frontman - Mike Noble (also the guitarist for the band) who is also capable to deal with melodic stuff, like vocal lines in refrains. Best example for it is Victims Of The Fall (I think this track pushes the band to another level). Threat To Society also has a lot of group-vocal shouts (quite few in Spitfire and much more in other songs) that in the 80-90`s were identification mark (still to this day) for a lot of thrash metal bands. I have been fan of it ever since and I enjoy expansion of it, on this album too.

Threat To Society touches the music spirit of such legends like Metallica, Anthrax, Megadeth, Exodus. You can hear few bits here and there but it`s all good - like having cherries on top of the cake on your birthday party. I ensure you that in the end, Potential Threat SF sounds like Potential Threat SF with their original songs.

No loose ends on this album (their best one to date) from start to end . Expect brilliant musicianship from this band in every aspect you would  think about when listen to thrash metal.
Tracklist:

1 War Machine (Intro)
2 Path Of The War Machine
3 Root Of All Evil
4 Cry Of The Wolf
5 Spitfire
6 Raise Your Fist
7 Preemptive Strike
8 Ancestor's Lament
9 Don't Look Back
10 Victims Of The Fall
11 Into The Black
Review by Slawek Migacz
​Added: 21.07.2019
Potential Threat SF
​Facebook