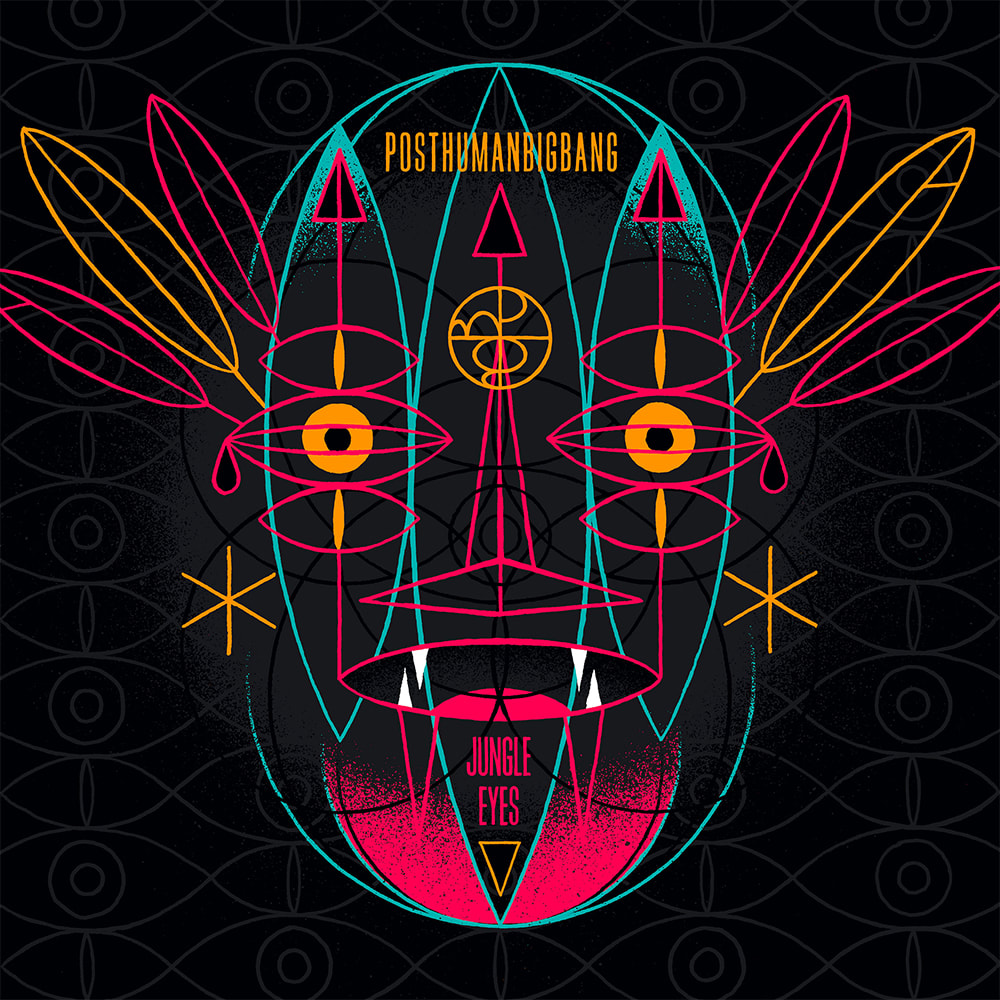 This Swiss band of great instrumental potential has created a warm, colourful album.  Main music composer of the band is Remo Häberli - lead & backing vocals, lead & rhythm guitars,bass, synths, percussion, keys and programming. He has been supported by original members; Patrick Häberli - backing vocals, Lukas Bleuer - lead guitars, Isabelle Ryser – bass, Mike Liechti – drums. Album features many guest musicians who contributed to sound of Jungle Eyes.
Cycles, it is probably the catchiest song of the album, having amazing, exotic music influences and dynamics. Glimpses of those exotic sounds you can also hear in instrumental tracks Theme, Off and regular song, Jungle Eyes in which, the band connects “voices” of random people having conversations with music of the band that builds music around it.... I do not remember now, but this idea, reminds me one of Dream Theater songs, and no, Posthumanbigbang does not play like that band from New York. Rest of the album is more melodic than it is catchy. Songs overall are being played dynamically, except atmospheric moments where they are not. Guitar sound is not metal, more like post-metal/heavy alternative rock. Music direction is a slightly progressive rock with some turbulent or reflective guitar moments or even soothing groove (Homebound II, Still I Am).  The album is full of layers; melodic and distorted vocal screams, blending sound of drums and percussion that both create beat patterns that shape the skeleton of songs.  Tracks has a lot of electronic effects that fulfil gaps in music but band does not do it just for sake of that, all the effects are important element of songs, like it all had its purpose. For example, in the end of Bury, programming creates incredibly sounding abstractions; also the track has very nice, calmer guitar build-up, right from the beginning of song. Other track like Bitter Tears - in the end of it, feels a bit funereal, sad.  Plus, songs have much experimentation with sound (alien-like distortions in Coal) that is successful for vibe of the album that simply has very good songs...Also, some silent and quietly delivered  atmospherics are important part of music (...Coal...) - I think that the band tries to imitate sounds of Jungle here, instrumentally.

When taking it all under consideration, the album sounds pretty dense. Music is pulsing and screaming for signs of life, trying to get rid off of negatively destructive emotions, and yes, sometimes, the music can strikes you emotionally.They completely dropped off moments of stagnation from their songs which brought a feeling of joy - constant search for best choices to the music.
It would be perfect if you decide and listen to the songs of this band, it seems that they put a lot of effort into making it.
​Tracklist: