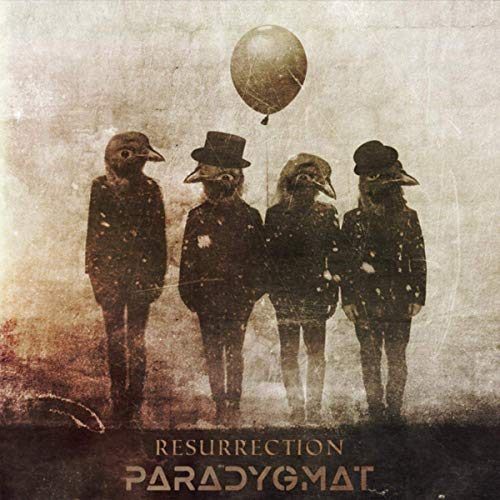 Paradygmat is a Polish band based in Kraków. Sound wise, the album shall satisfy the metal hearts and people who like well mixed and produced albums. Resurrection has many heavy tunes with roots in rock and progressive metal music.

Blood Will Tell is a good track to open the EP as the band plays it dynamically and the guitarists (including bassist) takes all the music on progressive path at once. Vocals are flexible and diverse with melo-aggressive approach. They change the music shape often, once by playing faster, other time by providing the music with nice groove and some melodies. This song has many well done music arrangements, they do not stick to one simple formula while playing the song. Many music ideas are being switched differently within the song. Drumming is very in point. My first impression is that the band took many efforts to work out their music; I have to tell - with good results.

Midnight is more toned track, still progressive but with calmer rock elements on guitars which this time, hit those less complicated musical notes. The song is getting more metal sound toward the end, also has very cool vocals around 4:12 mins. The track is moody in general, played at average, mid-pace.

Next track is very metal and progressive. Instrumentally, Paradygmat likes to bring some textures to their music. Never much, but there are melodic lines on vocals which makes the song little more memorable from others.

Ogień is obviously sung in Polish, and what make this track strong, are very rhythmic and catchy guitars which are lucky to be melodic at the same time. It`s another song that eventually has a chance to stuck in my head but I have to admit that even if Blood Will Tell is not the easiest song to adapt my mind to, it`s my favorite track of the EP.

And the final track...It`s progressive song but there are also some nice rock ideas on the way and guitar solo which keep music in good balance. Not the greatest tunes here I must say but on the other hand, maybe it's just a song that you would prefer more than me...

It`s time to write a summary about the band. I hear Paradygmat for the first time and I am glad it happened. I think that discovering new elements in music each time I play progressive metal albums is a fun. Paradygmat is kind of the band with music taste that I think is good, only over time. Before you do your personal rating of the EP, listen to the music more than one time. The impression on their songs improves for me in this way...

1.Blood Will Tell
2.Midnight
3.Resurrection
4.Ogień
5.What About You
Review by Slawek Migacz
​Added: 22.06.2019
Paradygmat
​Facebook