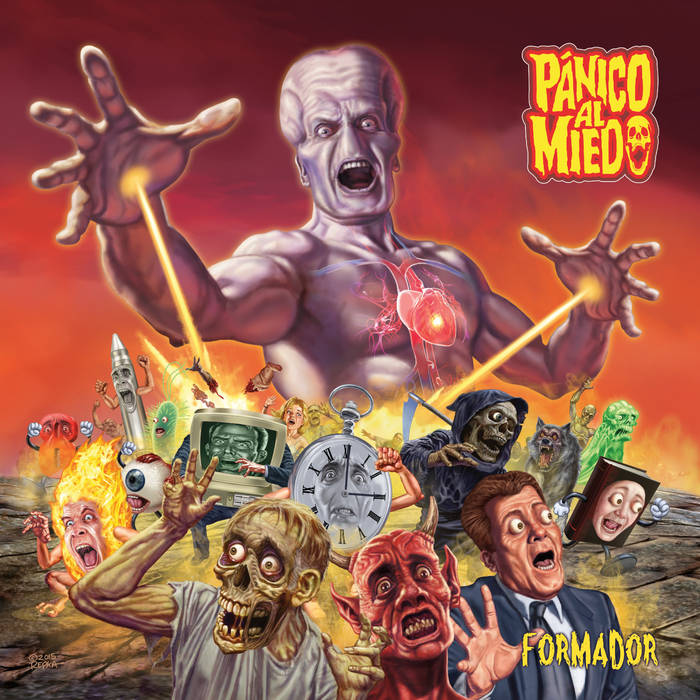 Debut album from Spanish Panico Al Miedo is quite interesting, energetic thrash metal, instrumentally very well performed, maybe the music is not super exciting but at least, they sound pretty decent. Their songs are mixture of aggressive and melodic thrash with well done guitar solos.  But this is where all good ends. The album is somehow unfortunate. I do not get why vocalist is so brutal and rigid with his voice while the music almost scream for clean and flexible thrash metal vocals which they do not have. I do not like this exhausting singing on this album at all, which is annoying and it`s too easy to get irritated when I hear it. Yes, this is the reason that I am not going to listen to Formado afterwards because vocals are where the band suffers unfortunately. I really like the music itself, sound and production... They are almost there with everything they play but it`s hard to listen to the songs when vocals ruin the fun...

That cheesy, front cover of the album with monsters is very cool... The band have put most of the music pieces together the way I am interested in but singing is very important for me and this is where they fail in my opinion. There are bands out there that have music and vocals intact, so I do not see any reason why I should care about this particular album, unless the band will do something about it in the future...