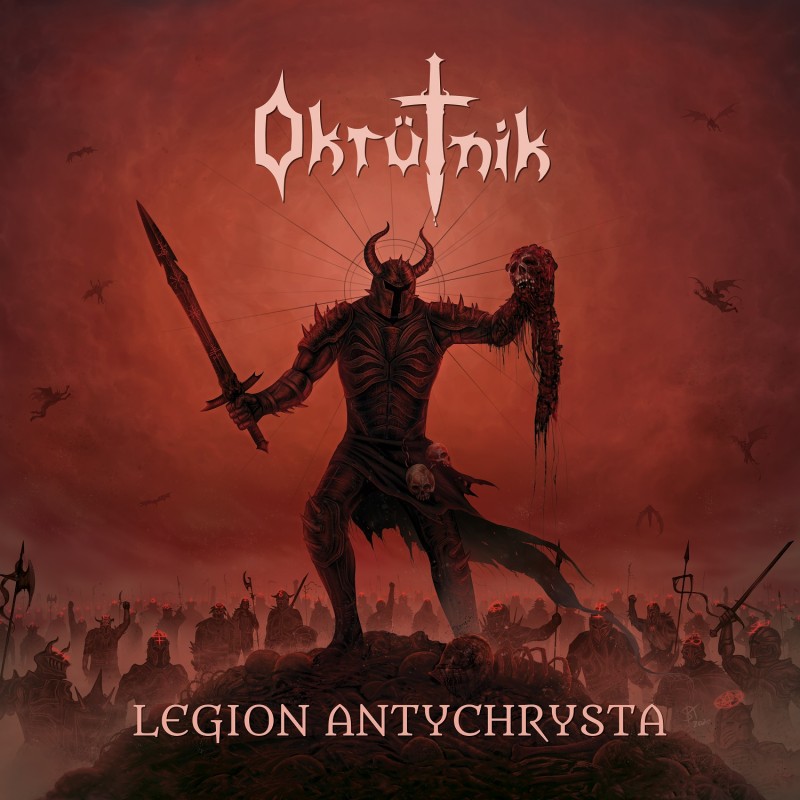 Okrütnik is a new band on the Polish scene, although they already made themselves known better during last year's concert tour, playing with the legend of Polish metal, the band Turbo.

The album Legion Antichrysta, which has just been released, is a jump in time, return to the metal roots, when more extreme metal was born.... The obscure sound and archaic songs-writing (Noc Galicyjska, Czarcie Łoże) of this album bring back memories when Kat released their albums Oddech Wymarlych Swiatow and Meal And Hell (also known under title 666). Songs that possibly gives me best taste of these albums are Okrutnik`s s/t track and the excellent metal ballad Portret Trumienny, a Na Grobach Kwiaty, which is quite endearing by its nostalgic character and clean, melodic vocals.  Music of the band is a perfect precursor to what time frame you can place this album in, so that metal fans know what's going on. Of course it's about the specific 80`s period of time when Polish metal was taking a shape and the scene had spawned its best classic albums (google bands: Kat, Thrashing Death, Open Fire, Turbo, TSA,Wolf Spider, from newer ones: Tyrada, Shadow Warrior, Iscariota)...

Legion Antychrysta is also very black/thrash metal record, as exemplified by the excellent opening track entitled Sabat, or a song that you hear later on which is Lament Księcia Czarnej Magii (a bit of Bathory vibe in guitar solos). There is also more thrash metal track entitled Wrześniowe Popołudnie Rzeźnika '52 that is like music of Kat meets Kreator meets Metallica in old metal times, which it works persistently well with very Polish rooted metal sound of this album. The combination of heavy metal with thrash also turn out well - song Guślarz. Dark and occult lyrics from the band, harsh sound of the album is what kick you into realm of hell and themes of terrifying terrors, horrors and nightmares instantly...

As for me, Legion Antichrista is a quite desirable heavy black thrash offering from Okrütnik, no Kat fans should miss it!