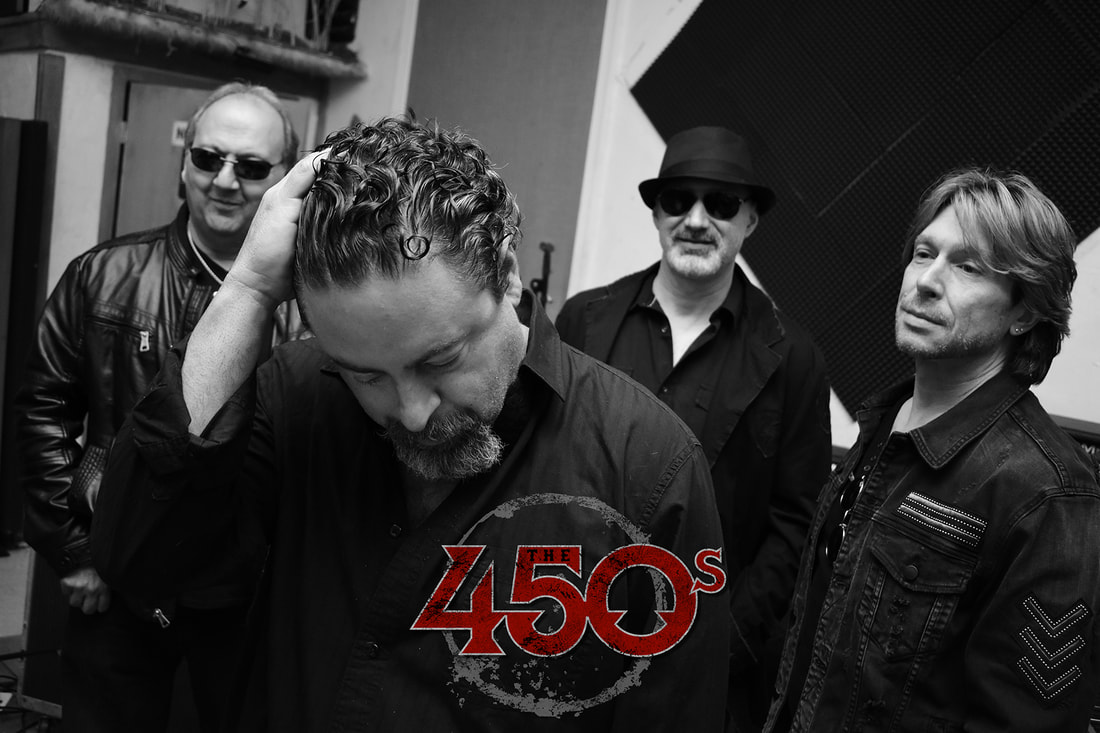 “Lucy Walk Away” now is also available as digital single on all digital platforms, and the album “The 450s” via Louder Than Loud Records (out: November 19th, 2021) available for pre-order via this link: https://smarturl.it/The450s

RockPoser.com describes THE 450s as, "...nothing like The Rods, they are though, a hard as nails f*** off bunch of like-minded misfits in their own right, whose collective vision has resulted in this gloriously ragged debut, that hits with the force of a charging rhino."
Added:14.10.2021
LOUDER THAN LOUD Sign THE 450s and the First Single and Video for the Track “Flowers From Columbine” Has Been Released Today!
NEW YORK CITY, NY (September 17, 2021) —  Watch the video for the song here,
“Flowers For Columbine” now is also available as digital single on all digital platforms, and the album “The 450s” via Louder Than Loud Records (out: November 19th, 2021) available for pre-order via this link: https://smarturl.it/The450s

Tales of decadence and despair are rendered with dark and edgy musicality in the provocatively titled songs “Flowers for Columbine” and “Lust and Denial.” Cleary, The 450s aren’t afraid to delve deep into the heart of darkness, either lyrically or in their modern take on soulful, raucous rock ‘n’ roll. Thankfully, some do get out alive, including frontman Rhett, who, like the other members of The 450s, is a musician with a storied history and prolific creativity.

But past critical raves and credits—and there are many among this foursome—don’t necessarily translate into brutally honest, beautifully rendered rock songs, influenced by the ages, but sonically current. Musical chemistry is elusive, but this band of brothers— though only two, Robert and James Jacobs, are blood brothers—have been friends and sometime musical collaborators for decades despite living in Florida, Connecticut, Georgia and Pennsylvania. Each musician had their own project when they came together: Respected drummer and producer (Anthrax, Blue Cheer and more) Carl Canedy just released an album with his iconic band the Rods; the Jacobs’ found strong success with a 2019 release from their acclaimed band St. James; while Rhett, a veteran of major labels, was thriving as a solo artist, earning critical praise for his “ugly-beautiful, gutter- to-penthouse vocals.”

When the quartet got together in Miami, on a whim, the chemistry was effortless, the resultant songs so strong that they caught the ear of legendary producer Jack Douglas (Aerosmith, Cheap Trick, Patti Smith), who went the extra mile in mixing the album, highlighting The 450’s inherent musical tension and dynamics. Chris Collier (Korn, Prong) also worked on the mixing/production, helping to hone the “modern” part of The 450’s “modern vintage” vibe.

The result is songs with an immediacy and nakedness that’s so intense it’s almost scary. The bluesy flamenco spookiness of “One King” is hauntingly cinematic; while the addictive “Black Tar” mixes a raw power with a dramatic string section, courtesy of keyboard player Ryan Sambrook. The musical push-pull comes from their personalities, as they explain: “Carl is the foundation and Bobby is the bridge between Carl and the rest of the band.” Jimmy, who cites “Jimmy Page’s arrangements and production abilities and David Gilmour’s precision,” among his influences, “brings the whole thing together musically.” And Rhett himself? He brings a reckless urgency vocally, observing, “This is the heaviest record I’ve ever done, yet it has subtleties, and I hope, at times, a pop sense. Lyrically, this album talks about the thin lines that differentiate where one ends up in life.”

The 450s bring an old-school band ethic to bear: No resting on laurels, no copping styles from their forefathers; no pre-fab or pre-conceived anything. “We got together in a room and turned everything up real loud,” they explain. “We jammed and recorded what came out. Ultimately, it’s “about creating this group of songs out of nowhere for no reason other than it’s what we all love to do.”

The first single “Flowers For Columbine” and a video for the track is set to be released on September 17th, 2021. You can pre-order at https://smarturl.it/The450s
The 450s Are:
Rhett – vocals
James Jacobs – guitar
Robert Jacobs – bass
Carl Canedy – drums
Ryan Sambrook – keyboards
About Louder Than Loud Records
LOUDER THAN LOUD RECORDS is a new Heavy Metal label founded by the two
industry veterans Giles Lavery and Carl Canedy.

Based in Germany & the USA LOUDER THAN LOUD RECORDS will focalize to sign and develop new talent, not just established acts, as well as acquire back-catalog and re- issue classic titles. The label’s first signing is the new, exciting band THE 450’s.
https://www.facebook.com/the450sband
https://louderthanloudrecords.com/
Added:18.09.2021