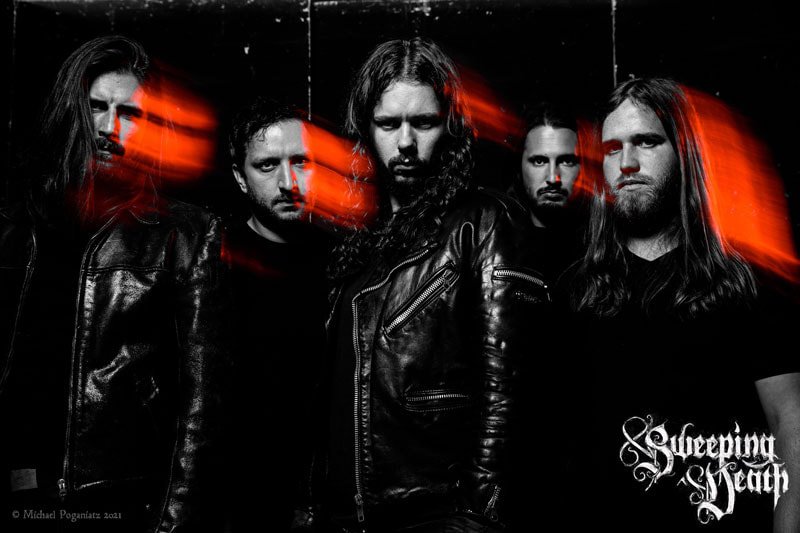 Photo Credit: Michael Poganiatz
German Progressive Metallers Sweeping Death are about to release their EP Tristesse on 9 September 2021. To get a taste, they have produced a music video for the song Alter The Rift.

Tristesse represents the Sweeping Death's third release, and although the recording started during the Covid pandemic, shortly after their last full-length In Lucid (2018), Sweeping Death already made the decision to release a concept EP next with the thematic focus on the number 3.

In the beginning, there was only the number. In the end, a concept EP with Arthur Schopenhauer's "The World As Will And Idea" in thematic focus.

Tristesse is a word play. It is French for sadness. Further, the number 3 as a constantly recurring concept in nature and philosophy is the anchor point of 'Tris+esse'. 'Tri' is Latin for 'three' and 'esse' means 'being'. Thus 'Tristesse' stands for 'three being' or 'trinity'.

Following the concept, the EP consists of 3 songs. Over the three songs, a journey of the lyrical I is to be described. Starting from the gloomy, cold and yet close to life first level over a transformation from within to the last, almost divine level.

Musically, the claim was quite clear to write songs that work in a live context. Sweeping Death reduced the complexity and focused a lot on catchy hooks and haunting melodies. The EP has dark sides inspired by bands like Mgła, Dissection and Tribulation as well as sublime parts reminiscent of classic Heavy Metal.

The artwork has been designed by Eliran Kantor (Testament, Satan, Helloween) and shows again the EPs concept, 'trinity'. The transformation in three stages also has been graphically implemented.

Line-up:
Elias Witzigmann - Leadvocals
Simon Bertl – Guitar, Backingvocals
Markus Heilmeier - Guitar
Tobias Kasper – Drums, Piano
Andreas Bertl - Bass
Bio:
In January 2017, Sweeping Death released their first EP 'Astoria', booked 40 shows and played among others also as a support for Destruction and Sepultura. They were 'Heroes of Tomorrow' in Metal Hammer and received good reviews from other media. Musically 'Astoria' is somewhere between Heavy and Thrash and bands like Iron Maiden, Satan and Anthrax inspired our sound and look.

In 2018, came the first long-player 'In Lucid' which was produced together with Rolf Munkes (Tony Martin, Crematory). On this record, Sweeping Death tried to combine influences from black, heavy and progressive metal in such a way that a unique mix is created that surprises the listener. Leaning on bands like In Solitude and Tribulation with a good portion of sophisticated heavy metal. The artwork is from Adrian Baxter (Mayhem, Cloak). Over the next two years, Sweeping Death played around 70 gigs, including the first co-headlining tour with Pripjat, opening for bands like Tribulation, Skull Fist, Striker, Loudness, Tankard, Mantar, Night Demon.... and among others in Sweden, France, Czech Republic, Austria and Italy.
Sweeping Death - Alter The Rift
Official Music Video
Sweeping Death facebook
Added:27.08.2021