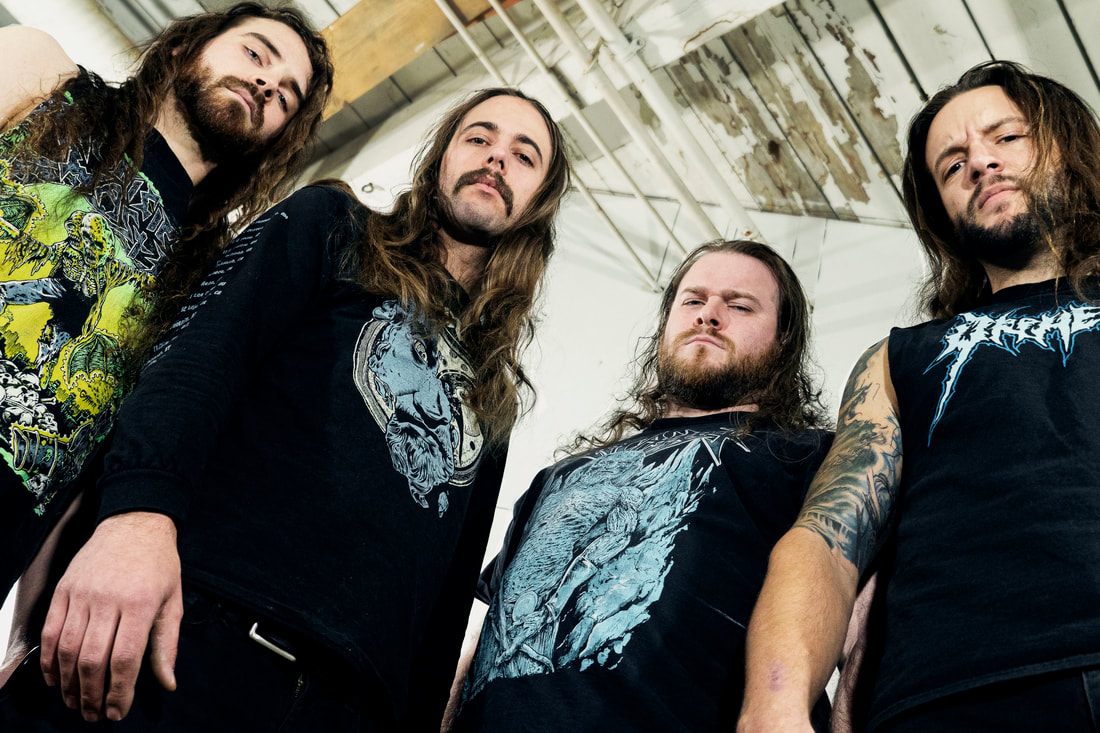 Midwestern Mosh Maniacs TOXIC RUIN Unveil Video for 'Divine Acclimation'
New album 'Nightmare Eclipse' due August 27; pre-orders available now
Sheboygan, Wisconsin’s TOXIC RUIN have unleashed the music video for “Divine Acclimation,” the third preview track from their forthcoming sophomore album (and M-Theory Audio debut) “Nightmare Eclipse.” The song shows off the combination of energetic thrash metal, death metal brutality and clinical technicality that propelled the band to the final round of the 2019 Wacken Metal Battle. The play-through video can be viewed here;
while the song itself is now available for streaming/download through all major digital music platforms.

“Nightmare Eclipse” – which features artwork by Mark Richards (Revocation, The Black Dahlia Murder, Municipal Waste) – will be released by M-Theory Audio on August 27. Pre-orders are now available for CD, digital, and limited-edition maroon-colored vinyl editions of the album at smarturl.com/toxicruin.

Says TOXIC RUIN rhythm guitarist Blake Toltzmann, “We made this evil-ass song about Mayan sacrifice called 'Divine Acclimation.' While we were still in the studio, we decided to do a play-through video for it because it turned out to be a short ripper that shows some technicality and kills our forearms! This new track comes at you with so much blistering speed and riffs that it will have you wanting to sacrifice your firstborn just to hear the rest of the album! Huge shout out to Nick and Marc at Carptown Studios for letting us film it there.”

TOXIC RUIN is also set to resume unleashing their metallic onslaught on live audiences with a show at the Terminus Theatre in Lake Villa, Ill. this Saturday alongside fellow Wisconsin death metallers Micawber.
Added:07.06.2021
Wisconsin Thrash/Death Metal Act TOXIC RUIN Unveil Video for Title Track of New Album ‘Nightmare Eclipse’
Sheboygan, Wisconsin’s TOXIC RUIN have unleashed the music video for the title track of their forthcoming sophomore album (and M-Theory Audio debut) “Nightmare Eclipse.” The song shows off the group's concoction of energetic thrash metal laced with death metal brutality and clinical technicality. The lyric video can be viewed below, while the song itself is now available for streaming/download through all major digital music platforms.
"We are stoked to be finally getting new material out there for the world to hear! ‘Nightmare Eclipse’ is so much fun to play and I'm sure it will get people moving when we bring it out live,” states drummer Dave Miller. “This title track is a really good glimpse into what else we have in store for the rest of the album and I really think the metal masses are going to like it!"
​
The current lineup of TOXIC RUIN began writing and recording songs for “Nightmare Eclipse” while relentlessly touring the United States in 2019 alongside bands such as Lick King, Micawber and Stonecutters and playing multiple festivals including Full Terror Assault and Slam Dakota, plus winning 2nd Place in the 2019 edition of Wacken Metal Battle USA. The result is the band's most mature and complex material to date, while also being their heaviest display of metallic force so far. Guest appearances from guitarists Glen Drover (Eidolon/ex-Megadeth), Derek DeBruin (Micawber) and Nick Weyers (Aronious) provide additional ear candy for aficionados of guitar wizardry. The first taste of the metallic mayhem to come was revealed through the music video for their recently released single, “Ritual Rebirth.” That clip can be viewed below.
TOXIC RUIN was formed in 2014 with a mission of blending classic thrash metal, old-school death metal and modern technicality and tones into a wicked headbanging brew. Operating out of their collective hometown of Sheboygan, the band released their debut album, “Subterranean Terror,” in 2016. This opening serve showcased the group's already-burgeoning barrage of furious riffs and lyrical content ranging from the sociopolitical commentary of tracks such as “Seat of Corruption” to the beloved craving of a good drink on songs such as “Alcoholocaust.”

The group followed up that debut record with the release of their 2018 EP, “Mortal Insolence.” The effort saw the current lineup of TOXIC RUIN take shape with Behrendt stepping into the vocalist position and the debut of rhythm guitarist Blake Toltzmann alongside lead guitarist Jacob Baneck and drummer David Miller. The effort saw the group further evolve their sound, leading to praise from Dead Rhetoric for showcasing “a stronger level of confidence and insight into dynamic songwriting for a thrash band not content to rest on recycling the past, but rather creating a bright future."
​
“Nightmare Eclipse” – due to be released this summer – is the next evolution in blending the heavier sounds of metal's past with the modern musicianship of metal's present. More information on TOXIC RUIN's new record and pre-order will be revealed in the weeks to come by M-Theory Audio and at https://www.facebook.com/toxicruin.metal
For more information:
www.instagram/toxicruin
www.toxicruin.bandcamp.com
www.m-theoryaudio.com
Added:17.04.2021