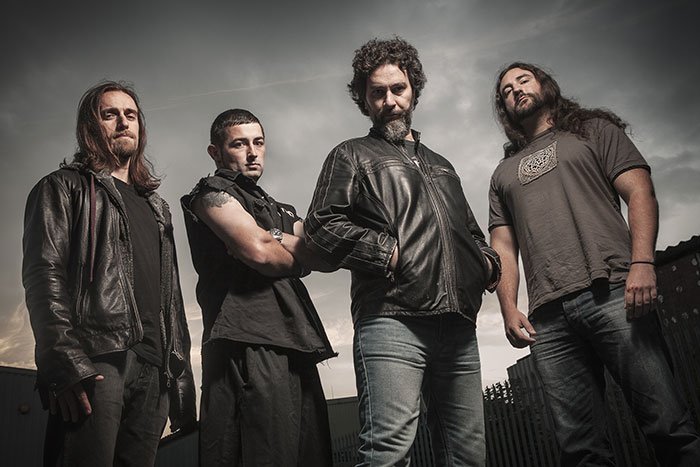 After a lengthy break from release activity, HUNTED returns stronger than ever with the band’s sophomore full-length effort “Deliver Us”, scheduled for release on September 10th.

Now operating as a quartet consisting of arch-wailer Chris G, axeman Steve Barberini along with the habile rhythm section of bassist Jon Letson and drummer Matt “Animal” Thomas, the band has spent their time wisely; improving upon their compositional and instrumental skills to offer us this mercurial blend of Heavy Metal’s past, present and future. Painstakingly refined into maximum alchemical combustion by the expert hand of Sonic One Studios’ producer Tim Hamill, the new material sees the four-piece up the ante in regard to the successful formula established on their praised debut album “Welcome the Dead” (2010, Massacre Records), arriving at an updated mode of expression that can only be described as a highly distinctive amalgamation of North American and European Progressive Heavy/Power Metal.

As was pointed out by reviewers in the past, HUNTED takes no issue in transgressing neither genre- nor songwriting rules when necessary, delivering songs that effortlessly navigate through vertiginous tempo shifts, serene sonorities and all-out aggression. The result is a breathtaking musical journey that will surely leave no listener untouched, making for a particularly satisfying listening experience for fans of NEVERMORE or Chuck Schuldiner’s daring work with CONTROL DENIED during the same era.

However, considering the nature of the eleven incredibly versatile tracks that constitute “Deliver Us”, HUNTED does not paint themselves into “this” or “that” stylistic corner and will surely appeal to a wider listener base as well. As a sign of their broad musical ground, HUNTED has chosen to include a lush and ample cover of Spanish cult act ANGELES DEL INFIERNO’s “Maldito Sea Tu Nombre”, sung entirely in Spanish, of course. The cover song will be a bonus track on the CD edition of the album.

Now, if you dare to venture beyond the safe confines of conventional Heavy Metal… take heed and let “Deliver Us” give you one hell of a ride!

“Deliver Us” is out on September 10th, on CD and Digital with a song taken off the album now available for streaming and free download at www.pitchblackrecords.com where pre-order information is also available.
HUNTED is:
Chris G – Vocals
Steven Barberini – Guitars
Jon Letson – Bass
Matt ‘Animal’ Thomas – Drums