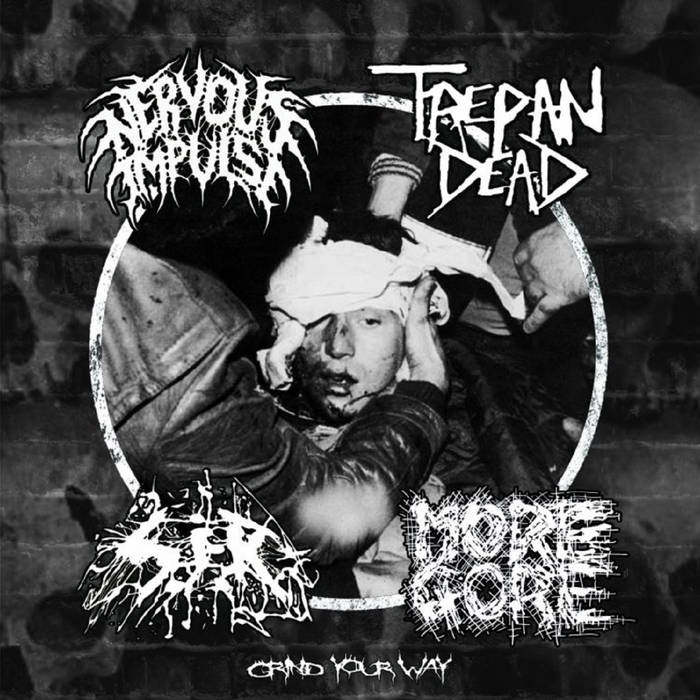 I know music of Canadian Nervous Impulse for some years now. Turbulent, technical grinding death metal core, crushing guitar rhythms, pounding drums, it is all the certainty that you always get from music of the band. Insanely severe vocalizations take the bar of extremes to its pinnacle. No favourite tracks this time, as they sound all good.

Trepan' Dead (Fra) is musically completely different band. Speed and brutality is what sound vicious and intense in music of the band. Songs are in the vein of grind core, but guitar sound and playing style is kind of death metal`ish. Those guitar riffs(!) (oh, just kill me) – it is alike listening grind core version of Morbid Angel in a way – such intense and aimless chaotic energy in songs of this band,  such relentless guitar play and drumming - killer staff and music!

Descending ... into awful sounding grind core from Russia. This is the band S.I.R., playing hyper-fast and some insanely crazy drum beats (tuned high), and they have metallic distorted bass in songs which even more pollutes their sound. Their dirty and indistinct guitar sound (remind me Nuclear Death- RIP) prevents me from fully penetrating their music ideas - in more details, but the musical cruelty of S.I.R. is bigger than any other band on this split. Sometimes awful is good and so is the terrorizing and fast grind core noise of the band.

In Ukraine (not far from Russia), heavy, fast and chaotic grind core songs plays the band MoreGore. Low growls and screams is what you want to hear and it is what you get from the band. Few heavier moments on the album may feel death metal but it`s  been kept in grind core style anyway. Drumming is pretty solid and production to it too. Some vocals and intros sound humorous or grotesque, which is kind a method that many grind core bands use in their music - perhaps, to not always take seriously of what you listen to, but have more fun with it while it may sounds nasty...
Those are decent grind core songs of MoreGore, no music highlights here, but have had a good time with it.
​Tracklist: