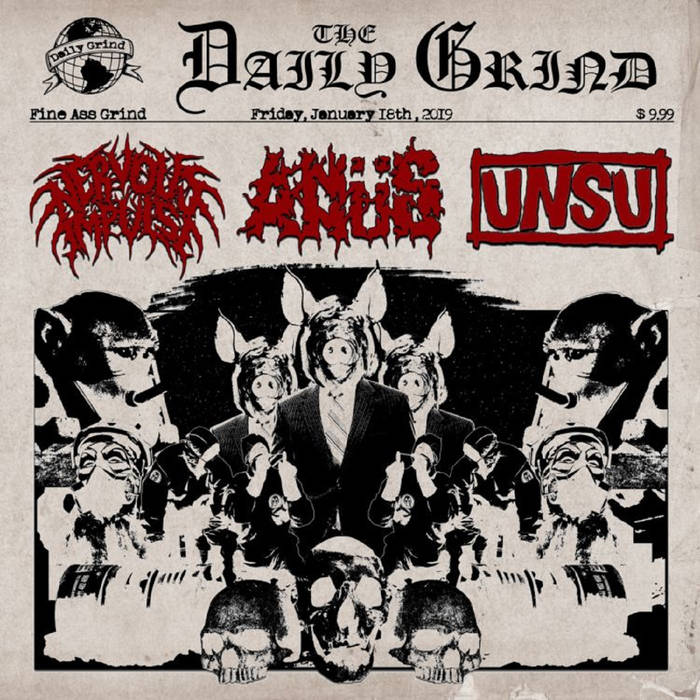 It is second time I meet the music of Nervous Impulse from Canada which open off this brutal and blood spilling release. First 5 tracks plus cover of Whorecore belong to them and they will beat you up with ultra fast and furious blast beats on drums, sick growling vocals and with combination of neck-breaking, technical grinding death metal guitars with hint of slamming death metal. Songs are very intense and they are sickly brutal and messy as a serial killer on killing spree.

Anüs takes you to the world of slamming death metal and meaty grind where piggy sounding vocals and deformed growls will make you feel good or you will be just disgusted. This band sound morbid and ugly as fuck but few intros are actually pretty funny. Some rhythm guitars sound nearly melodic, of course, in terms of grind. Sound is low- tuned and heavy, the music is at a medium and fast pace and those Swedes will sweep you off from the face of the earth by severe sound and sick ideas which infect this band from who knows where.

Unsu is French band that play more traditional and noizzy grind core with screaming the pain off vocals, straight&aggressive punk/grind guitars and fast drumming. The music overall is chaotic but surely it`s okey to listen to those crazies.

It`s very cool album with 3 different angles on grind and its sound.
Tracklist: