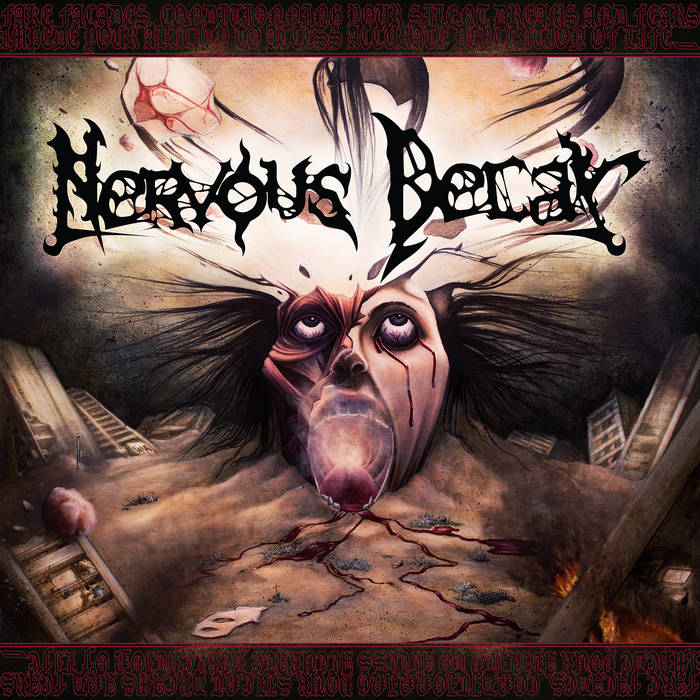 ​Debut album of French band Nervous Decay is simply called Nervous Decay. ​Line-up for this release is: Nathan Thebault-guitars, Guillaume Pavaillon-vocals&bass. Guilhem Lesage-drums,Grégoire Bonin-guitars.
What I just heard is death metal with technical guitar work – not enormously intricate or anything like that, however, music conveys vibes of bands like Sadus, Agressor or Death when comes to accenting bass lines in some songs - Cerberus' Brace, or in song Daily Poison where bassist (also a vocalist for the band) matches perfectly his playing style with the music. Nervous Decay delivers some aggressive thrash metal riffs along with melodic death metal (Doomsday Clock); they structure and layer guitar tracks with brains. Vocals certainly belongs to category of death metal, also when comes to sound and guitar shredding, it is primarily very death metal album too. Music is usually fast or middle paced, instrumental twists and turns are frequent (Mirrors Of Pain) with few melodies here and there. There is one slower and atmospheric (until it`s not) track Shield Of Delusion that fits more Scandinavian type of death metal - which they do not play in their songs, except in this one. They mainly focus on technical aspect of their songs, but there are fragments throughout the album when guitarists shred harder by which music sounds more brutal, rougher and old school (Lobotomy). There are few tracks where rhythm and lead guitarists build passages until riffs become catchier, with few hooks on the way. Music also feature guitar solos, which is a nice addition to band`s song writing. In between some tracks, there are some intros where French people speak English with very funny accents in not necessarily funny situations...
​
if you like 90`s death metal with “pulsating” bass ala Steve Di Giorgio, nice guitar arrangements ala Schuldiner, you should be glad when you hear the music of Nervous Decay, I am.
​Tracklist: