Murder Worker
When The Scum Becomes Dinner
Base Record Production 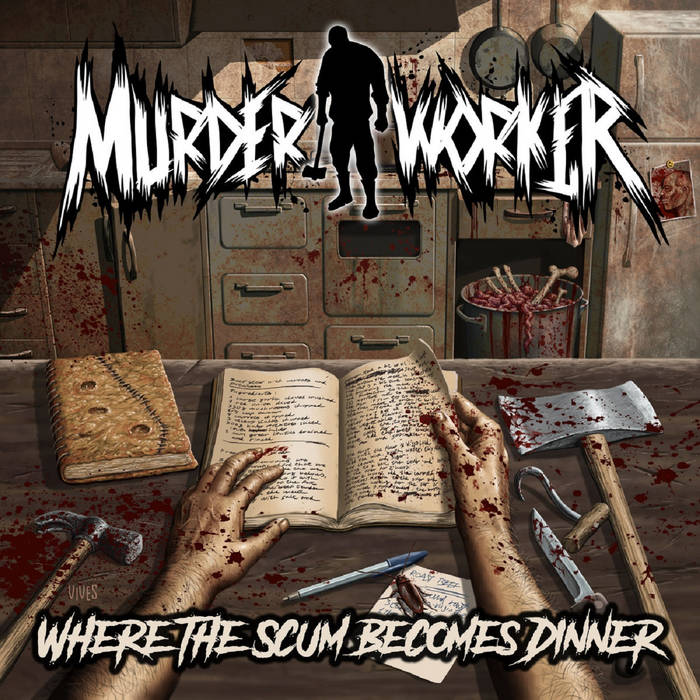 Murder Worker from Spain. I know them! I have had been reviewing their music in last couple of years and keep doing this now. If you follow us, you shall quickly find out that they are old school death metal band. I do not have lyrics for the new album, but hey, look at song titles, it is like reading a menu of some bloodthirsty cannibal, right?. Album starts off with screams of a girl who knows that she is about to be butchered. So, it`s easy to theorize where the album belongs to, lyrically, and musically, it`s also a good offering.

Except last track titled Mommy Style Smoked Spleen, in which there are some blast beats laid down, the other songs do not have any fast drumming, just decent beats where song writing counts more than furiosity itself. Album is commonly middle paced, has very heavy, rhythmic songs, some melodic guitar leads, old school death metal shredding and crushing death metal sound ( comparable to Scandinavian death metal, particularly in track Liver With Sesame And Mustard Cream where I also sense it musically). It is not that the band brings any new elements to death metal, there are tunes that remind me old Carcass (vocally the most) or Autopsy (rusty old school death metal riffs and weird-some rhythms) but these are minor influences, as for me, Murder worker is trying to do their own thing in territory where it is hard to write anything original. I am okay with it. This album has skull splitting song like Surprise Eggs (Stuffed With Chopped Ear), groove and heaviness with melodic glimpses (Priest Stoma Stew With Potatoes or Skewer Of Kidneys And Marinated Eyes). Opening song Grandma's Culinary Secrets delivers some gripping atmosphere or track like Mommy Style Smoked Spleen featuring nice guitar layers, faster parts (rarest thing of the album) and slow, chopping riffs (much more like these are to be heard in other songs). Beside first and third track, my other favorite song is Banker's Cancerous Lung Pie where guitar groove is one of the finest of the album. If you look for nothing except pure death metal shot, track Nun Blood Jelly With Brain Sorbet would feed off your mind perversion just ideally.

Vocals are important elements of the album. Scratchy and deep growls is what make this album more gruesome and horrifying. Calling When The Scum Becomes Dinner a gore death metal album is not a bad description of the music, perhaps it would be more tense with better amount of sick intros, but anyway, it`s quality, brutal and melodic death metal album by MurderWorker.
​Tracklist: