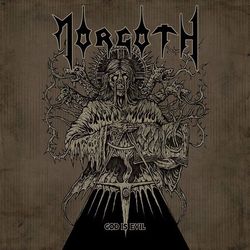 Morgoth are veterans of German death metal. In mid 90`s  became recognized mainly by Cursed album and even better Odium one. Just after another album Morgoth vanished for many years as many other bands. A few years ago the band returns for live appearances and after good reception, brand new record with 2 new songs becomes a fact.

Opening side track God is evil shows an old Morgoth style approach, well known from Cursed album. Songs are simple with traditional death metal wall of powerful and melodic guitars. I have to admit that Marc Grewe`s vocals are impressive when he is screaming ...God is evviiil... like falseto or whatever you wanna call it. Awesome.

Next side and song Die as deceiver follows the path of crushing death metal showing Morgoth as all time solid band, off innovations in a genre but still very predatorous, especially delicious lyrics.

This EP is a little taste of what is coming up on mentioned by the band-Ungod album.