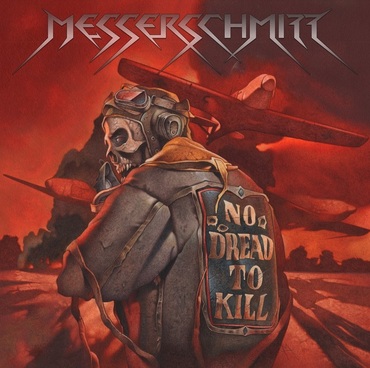 I adore all those German CD pressings as this one remains like that old  design of Noise Rec . on CD presses back from 80`s. Cool, memorable and getting me in mood fast like blink of an eye. I got this album pretty much around of its premiere last month and I am honoured to give you response writing this review.

If you think I tell you a wishy- mushy bullshit about this album you are wrong. Some bands want to sound old and some are there already. No dread to kill is that effortless album that sounds very European like it was hell era of Destruction`s first decade, Assassin or Coroner`s methodical thrash that I highly rate. But Messerschmitt does not sound that ugly technically as they just have done now, what others could not, 30 years ago. That`s polished thrash of 80`s in 2015 and that`s the way music moves forward, I believe.

The band uses simple formula of accelerated speed guitars with extra rhythms that grabs me in every song plus amazingly great, precise solos that just blew me away. I am not knocked by that I am just certain how well it works for me. Vocals with those double choruses are  like seeds of best times of thrash metal wherever it suits you. Messerschmitt have recorder exact album that I have been up to  charge my life-force  battery. Play this CD at any point and you won`t be disappointed if you dare to call yourself a thrash fan.