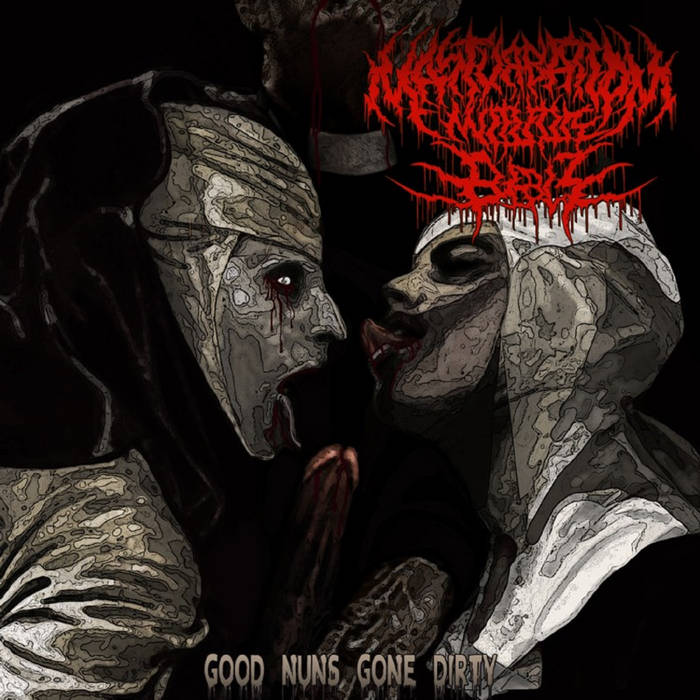 Masturbation With The Bible presents 6 new tracks on the new EP. Remaining songs are taken from their 2013 demo, which was only available on digital formats. Do you want to know how they play brutal death metal in Venezuela, you should pick up Good Nuns Gone Dirty, play the music, and collide your hearing receptors against flying decibels. Production of those 4 new songs is very severe. Low tuning of all instruments is a rotting hell, just like all vocals here. It`s a mix of slamming and heavy riffs, fast drumming, compiled with an extreme and disgusting growls that often turns into gurgling, piggy-squeaks, phlegmatic vocals etc - you may feel that your mind is swimming in vomits. Grind core elements are recognizable in all-ways growls and just music  itself. I think that the band`s best feature are generally brutal, over the top vocal performances. Music (instrumentally) is very fast or slow, grinding death by Masturbation With The Bible won`t  surprise you at all, but who cares, right?. Some intros throughout the record will tell you that religion is the prey of people against other people, especially in churches where priests malpractice their faith in god`s name (from press note it says that lyrical content of the EP is about church aberrations, which just means bad shit - intros will tell you more). Brutal death metal is always good for head-banging and possibilities for breaking your neck when listening to this record is at high risk and can happen at every pace in their music.
For decades I heard the name Prostitute Disfigurement but never heard their music. So, Swollen is the cover song that Masturbation With The Bible did for this release, which obviously show that world is full of brutal death and grind core bands that may pollute your mind in good or bad ways (depends on type of person you are). My favorite new songs of the EP are tracks 2 and 3.

Few words about the demo tracks which basically sound rough, like there was no post production made in studio, or if there was, then the sound had been just fucked-up, but you know what, it`s right, it sounds no more no less like the demo with shitty, disrupted production, like it was expected and no one would really care. Songs as earlier, are  either fast with pummeling drums and sick growls or slow,with  chunky riffs remind me Mortician sometimes.
Good Nuns Gone Dirty is for fans of  slamming brutal death metal, eventually grind core, and you should not care that the record sounds cliche  (both American and European styles), because it`s surely decent record.
​Tracklist: