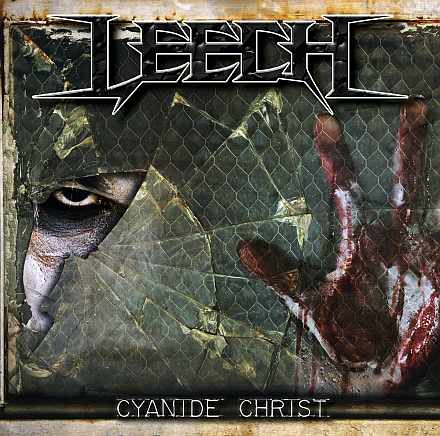 Before I start to write about the album I think that it would be OK if I give you some background about musicians in this band. Lars Lindén, Stefan Westerberg, Jari Kuusisto, Jens C. Mortensen are current or ex members of Carnal Forge which is the band that has hell lot of albums out already and they have earned  recognition in metal community. Lars and Magnus are also ex-musicians of long time buried Swedish band Rosicrucian which has released two brilliant albums for Black Mark (the label that was mainly focused on legendary band Bathory). No Cause For Celebration is outstanding but totally underrated 90`s thrash metal album from Rosicrucian and if you haven`t heard this thrash metal gem yet, check it out!

OK, back to Leech and their album. First of all, Cyanide Christ was recorded in 2003, mastered in 2013 and my review is about 2017 release of the album issued by Polish label Defense Records under license from LL Production.

Cyanide Christ is 100% thrash metal album and they did convince me quickly by music that level of musicianship in those 11 songs is certainly professional. Same opinion goes about the sound and production of this record which is killer. The album has a modern and classic thrash sound of 90`s and later times (Testament, Anacrusis, Overkill).

Music wise, this album is amazing, all the fucking way from start to the end. The tunes are highly aggressive, music is mostly fast and as my friend told me; it`s indeed impressive how easy they thrash. Tracks feature many melodic guitar and vocal lines that go along with absolutely raging guitars shreds that also sound so pissed off for most of time. Of course, if you are real thrash metal guy, this is exactly what you want from thrash metal band to hear and Leech delivers the storming shit of it but I like this shit the way the do it.  They also play superbly explosive and intense riffs while quality of songs and sound are measured to my full expectations. The album has my favorite Bay Area influences (Metallica, Exodus) but fortunately Leech does not sound that much American - to the core, only better. The songs are pure assault on your senses, at the same time the band is capable to cool your rage (they actually give it to you quite often) down by melodies which are injected with catchy moments and stunning guitar solos. Either ways, they are always prepared to give me energy kick in each song which are all superbly arranged and mixed.

Vocalist in thrash metal band is always important factor and they do not fail in this element. Vocal lines of Cyanide Christ are flexible and diversified to the requirements of their music, which at some points they play it technical.  Jens Mortensen sings a little like Sy Keeler from Onslaught, so, it`s all sound angry and damned good.

I am a person who is able to appreciate great instrumental efforts of the musicians and you should know that some of them play music in this album like wizards. Do not wait, get this album and get smashed.