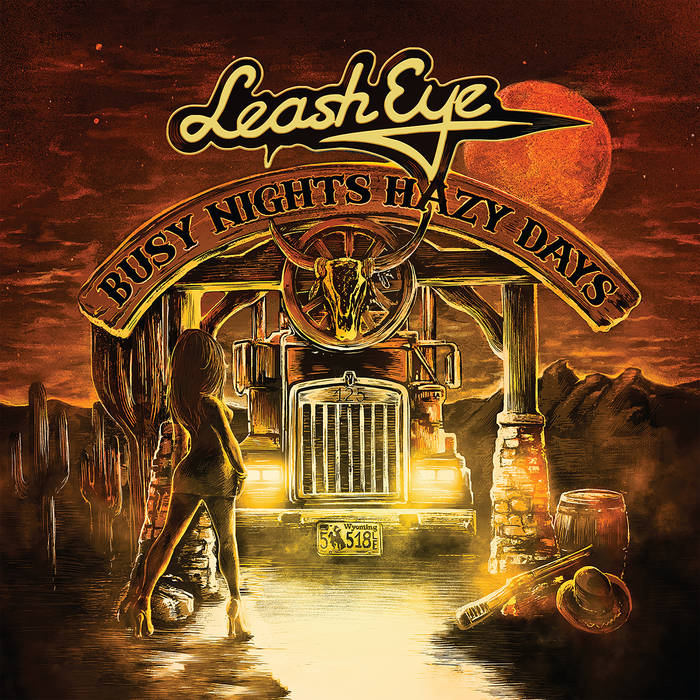 Leash Eye plays loud but pleasant music, it`s what I felt after listened to songs from this album. They are based in Warsaw/Poland and this album tells me that it`s an interesting mix of people who have found themselves on a common musical ground and whose songs are their personality emanation.

Busy Nights Hazy Days is an excellent combination of hard rock from the 70s / 80s, with a mixture of stoner rock, doom metal and space rock. A lot of heavy bass and low-tone guitars make them sound metal, but the music itself is very alive and melodic wherever I focus.
I must admit that for a long time, I have not heard of a Polish band that can sing so well, so super melodic, and they are so confident to what can be done with human voice. Sometimes the band combines male and female vocals at the same time, plus they draws a bit from a gospel music (a few female choirs almost sound like that). So, the vocals in the album are really well done -  drives the album with similar vitality as instrumental side of this record.
The album often features Hammond organ, on which the keyboardist can play vibrant solos, extensive arrangements, or simply build a certain atmosphere in the background. Songs have very good coherence, dynamics and catchiness here. I won't hide that I like the Hammond organ sound, thanks to Deep Purple by which Leash Eye in the core sound like a classic hard and heavy band, but studio production is pretty modern and more massive (Step On It). However, I assure you that in Leash Eye this instrument sounds a bit different - at times as if it was out of tune, but at the same time, it consists of full-on, great musical ideas. And what's more, Hammond organ simply sounds very good here, they do not try to copy other bands.
There are quite heavy and melodic guitar riffs on the album and singer play his voice naturally, and reveals his vocal talents gradually, in every song, but particularly in track entitled Betting On One Horse or things even getting better in Where The Grass Is Green And The Girls Are Pretty where energy and melodies goes to the heart and wins my trust to the band`s music. For me, the hit guitar riffs shine in songs Electric Suns (opening riff sounds familiar to classic hard rock tunes, but guitars work kick ass anyway and keyboardists goes crazy in the middle of the track. End of the song could be actually a separate song, check it out to find out what I mean). If you've ever sold your soul to classic bands:  Dio, Saxon, Deep Purple, or Tommi Iommi`s guitar play, song such as F.D.T.D has a good British rock feel to it that is present from time to time in this album.

Busy Nights Hazy Days is easy and joy album to listen to, from start to end. This band proofs that catchy melodies and easy going song-writing are the way to write good, memorable album that keeps playing its music even when the disc is no longer spinning in my player, but inside me.
​Tracklist: