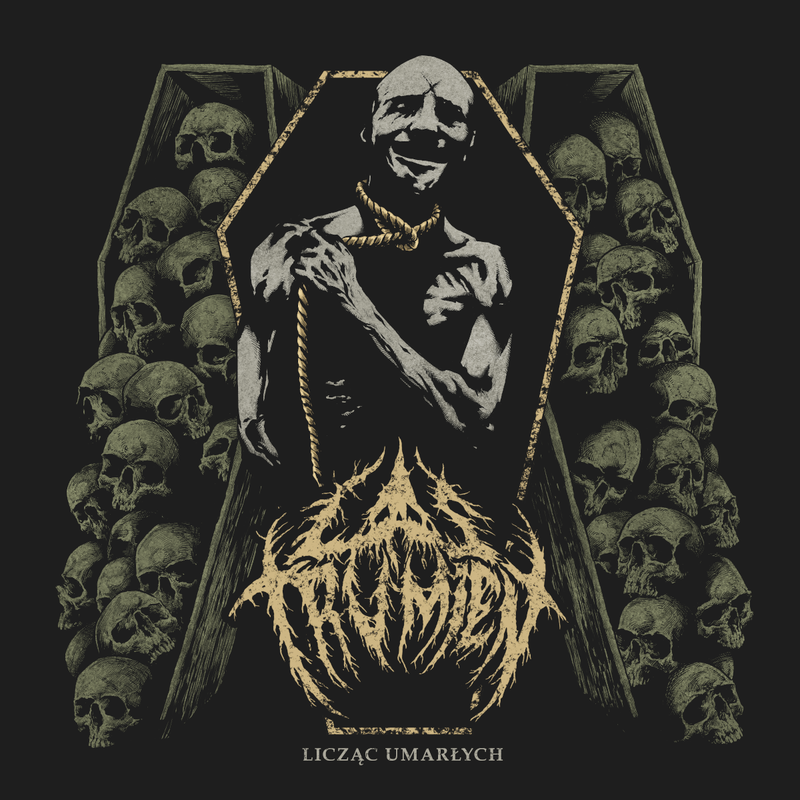 Las Trumien is a newly formed band from current or ex members of O.D.R.A, J.D. Overdrive, Mentor...If you are familiar with these names, you can expect a bit of everything musically in songs of Las Trumien...

Licząc Umarłych is mainly a mixture of harshly distorted sludge when comes to sound of guitars and bass, pace of the music is more doom metal (Król W Złotej Rękawiczce), also there are some inclinations of stoner metal in their songs where heavy riffs take a bit melodic, rock`n`roll direction (Gdy Zatrzęsie Się Ziemia).
Lyrics of the album are in Polish. I can give you a clue that stories sang by their vocalist are themes about serial killers. I do not know if all, but most of these stories have been inspired by true events (Sprzedawca śpiewników). Singer has doubled (sometimes) his vocals simultaneously, so the outcome is sort of snarling screams - I still can recognize words, which is good. Some other vocal lines sound more melodic but still pretty rough (Król w Złotej Rękawiczce).
When look at musical background of band members, and this comparison might be a little surprise, I must write that some doomy parts in their tracks remind me those slow, miserable riffs of British band Cathedral (song Synod Trupi), it just sound more sludgy, however I just did not expect to hear that. Other doom metal song entitled Klan is a real crusher with little of that classical Black Sabbath feel in the end of the song when they played a bit faster. Actually, 2-3 times throughout the album, the band performs some of those old heavy metal riffs that taking you to the roots of hard rock and metal. Cmentarz Miłostowo has nicely moving guitar rhythms, which at the same time, sound quite catchy (in this vein is also mentioned song Klan and both tracks are my 2 favourites of the album). Groove doom metal does a good job of building the shape of this song as well. Music-wise, I prefer Cmentarz Miłostowo better than the single off the album called Sprzedawca Śpiewników.
​More dynamic doom metal punk song is Krokodyle Łzy where it`s nice to hear some faster tempos played by the band and few instrumental melodies.  It`s not perfect, but good sludge doom metal album.
​Tracklist: