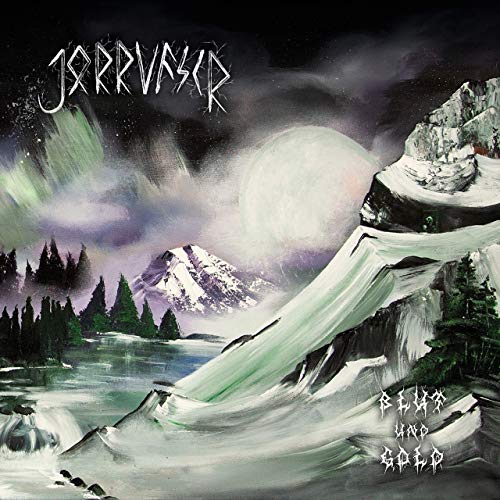 I remember playing The Elder Scrolls "Skyrim" for many months which was a huge gaming experience for me. I write about it because the name of the band Jorrvaskr is also a place in the game, and the album art work reminds me of the winter landscapes from the series which overall is a good addition to the atmosphere of the album.

Blut und Gold combines death metal of heavy guitar break downs (Jorrvaskr) with black metal influences where the band has given some tremolo guitar sounds to sharp songs better, making music sounds bleak and bit more atmospheric – tracks Weishei, Die Bruderschaft...
Growling vocals at its lowest tone sound a bit stiff but severe and ordinary death metal expression of it is what you should easily adjust to, however it is not the only thing the singer does.... Jorrvaskr vocalist does some black metal screams as well but to a smaller extent than death metal vocals that I think took bigger part in creating the tracks for the album.
My favourite song of the record is Der letze Widerstand which has a decent, catchier guitar lead that you can hear in song when drummer plays faster parts. Jarrvaskr did not captured many catchy music fragments in their tracks so, I enjoy this one particularly. The heaviest track of the album seems to be Arcanaeum which is more dynamic death metal song. When hearing very good piano played in Ankunft, it just sounds like good idea to open the album like that because the band did not showed here the music direction for Blut und Gold, instead, you can hear more dreadful atmosphere that the band is able to create by just using attributes of this very peculiar instrument.
A bit stranger song with what would appear as death metal guitar tapping (here, it sounds more black metal) is Lug und Trug but complete anomaly of the record is track Skyrim Bloody Splatter Party that is a melodic grind core song with gurgling vocals which is not they normally did in this album.
Blut und Gold has its moments (mentioned), song structures sound very simple. Heavier, death metal guitars in songs do not sound particularly impressive or creative but it`s well produced album where all in-between black metal fragments in songs make it better album in my opinion.
​Tracklist: