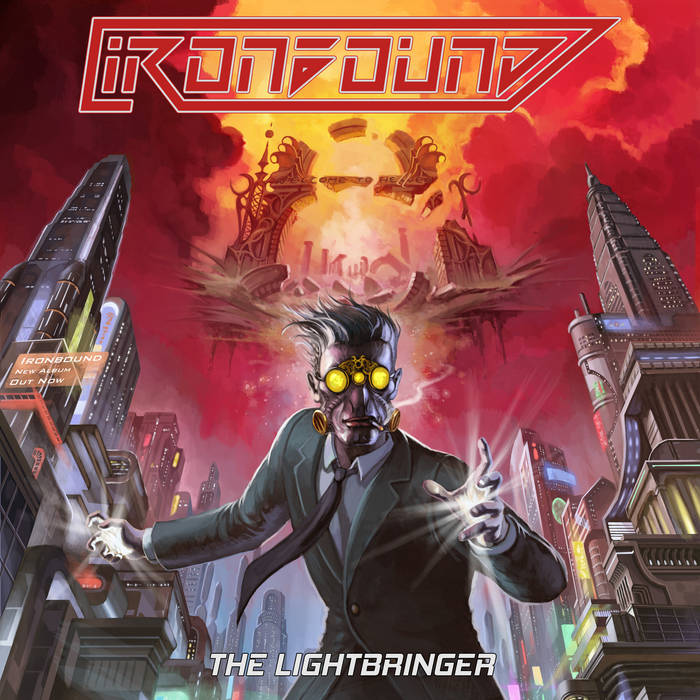 I took a quick look at line-up of this band because The Lightbringer (their debut album) sound professional, both production and music wise. As it appeared. band members have been playing in many other bands, the ones I know personally from knowing their music are Soul Collector (thrash), Sandbreaker (doom) and there are many more...Ironbound was formed in 2014 and their music style is basically heavy metal. They have very good vocalist, Łukasz Krauze who has very strong voice and abilities for singing melodic lines or kind of ballad parts, like in the beginning of Smoke and Mirrors,where  later on, the song has a great shredding guitars - mind Iron Maiden! There is also heartwarming acoustic ballad - The Turn of the Tide - vocal chants, melodies and solos rule.To my ears, this singer has the voice which is sort of crossover between Mat Sinner and Blaze Bayley.
They play like NWOBHM bands many times throughout the album but sound harder, more like heavy bands in Europe. A bass player (Zbigniew Bizoń) on this record also sound very good, distinct, he plays in the vein of Steve Harris, but maybe a bit more aggressive, like in German Heavy metal (Primal Fear). I really like guitar work on the album, heavy riffs are interwoven with catchy leads, awesome guitar solos, melodic choruses and catchy guitar passages.  Shredding parts sound super shaped and energetic (The Witch Hunt), guitar chords create a foundations for for very solid vocals that you can hear along the music.  Their musicianship spawns natural creativity for music itself. Drumming by Adam Całka is ordinarily great, just as it should be done on this type of record. There are many songs here, where I can feel that the band achieved a synergy for their music, you hear track like The Witch Hunt, When Eagles Fly, Beyond the Horizon (instrumental) and you know that they found out that "something" that make their music sound like re-imagined heavy metal classic, a steel of the genre.

It`s good that The Lighbringer has been released by Ossuary Records (it`s with high possibility their best album they have released, which should bring them some glory) because in my opinion, the record is so good that could be released by Nuclear Blast, easily. There are some great tunes on this record, you do not want to miss them out. Ironbound (POL)!!!
​Tracklist:

1. Far Away
2. The Witch Hunt
3. When Eagles Fly
4. Smoke and Mirrors
5. The Lightbringer
6. Children Left by God
7. The Turn of the Tide
8. Light Up the Skies
9. Beyond the Horizon
Review by Slawek Migacz
​Added: 28.06.2021
Ossuary Records
Ironbound bandcamp