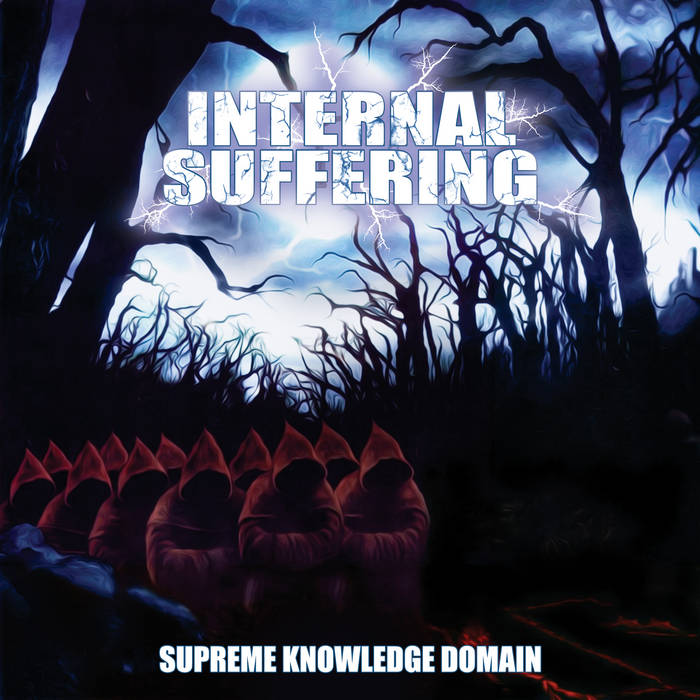 Supreme Knowledge Domain is a debut album of this Colombian/Spanish band from 1999. It was already re-released number of times by various labels and on every possible format - vinyl, CD, cassette... Now, it`s time for another, a 2020 CD re-issue of the album with 4 bonus tracks and logos of Satanath Records (Rus) and Rotten Roll Rex (Ger) on the cover.

Internal Suffering is a brutal death metal band and that's exactly the music you'll hear on this album. There is no history to their songs that you could not have known from other brutal death metal releases you heard in your life. If you like 90`s death metal like Deeds Of Flesh, Reinfection, first Suffocation album etc, you should know that Supreme Knowledge Domain has songs in this vein but song-writing (or rather a slaughter-writing) of Internal Suffering music is badder, but music to my ears is crueller and more exterminating..The sound of drums has tons of blast beats and double kicks drums which drowns the guitar tone a bit, even the remix of this album did not improved it much ...Note, it does not sounds that bad, but since I heard album Of The Dark Light by Suffocation, which change my perception on brutal death metal and how masterfully it can be produced nowadays, Supreme Knowledge Domain sounds today more like a demo.

Okey, the band presents 10 very fast tracks that sound severely and brutal as fuck on this album. Also, hear out those pulverizing vocals, hear out a madness on drums, and death metal guitar shreds (restrained technicality) with zero melodies and just speed and brutality – a method to wipe out your brain cells without leaving home. The only thing I remember from the album when it ends are slower, very heavy and slamy death metal moments – music has better music clarity if the drummer doesn't play fast in these fragments.

Latter, in the same year (1999), the band recorded 4 songs (bonuses in this album) in other studio and changed the drummer (the rest of the line-up remained the same). They still managed to push their brutality very little forward (hard to believe it`s possible), drummer plays better, more technical, more rolls on drums. maybe that`s why their songs sound so devastating...Vocals are pushed to the maximum of extremity, there is more tense guitar intensity, so, only brutal staff here....

This album is no surprise at all, but I am always okey to refresh old school brutal death metal in my head which is what you get from Internal Suffering when listening those songs.
​Tracklist: