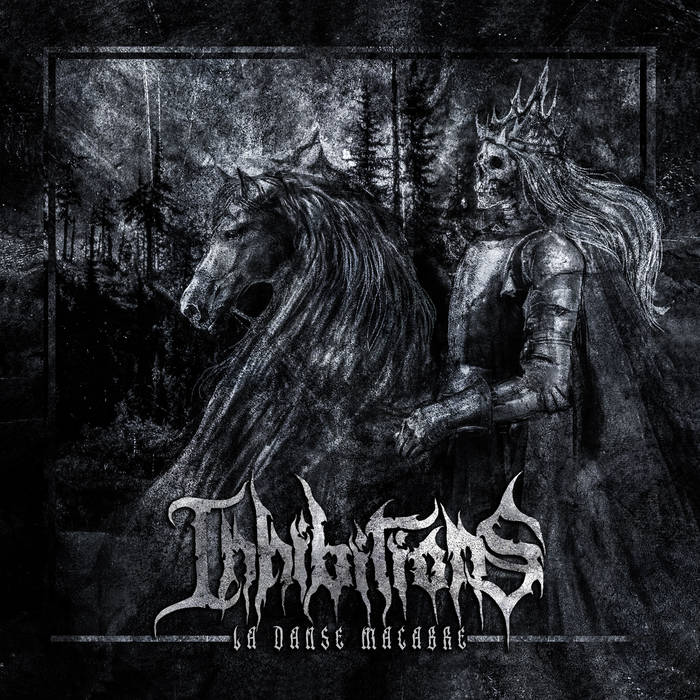 3 demos and 2 full length albums to date, it is achievement from this Hellenic black metal band. I think it`s already third metal act from Athens which I am glad reviewing within a period of last two months.

La Danse Macabre is Inhibitions` niche and low profile sounding album - especially guitars that have kind of harsh and modest sound like in Burzum, Dark Throne, early Bathory and Rotting Christ. I give the production my thumbs up because the sound somehow fits the spiritual face of the band and they are able to share the essence of their music in fairly original way.

Some of the tracks are like thrilling  macabre of sounds, mainly created by few spooky keyboard ideas that in my mind are with relation to old, mysterious movie soundtracks like in a song The Calling, for example. But even if so – I do not think they persuaded themselves  to sound purposely like that - it`s just me I guess. I also would not call all parts on the album of being much symphonic. They just do not do it with big splendor and as much bombastic as Dimmu Borgir which I think is even better for my reception of Inhibitions music. To my ears, some keyboards sound more like in theatrics, like the music that in very old times was a background to theater plays, acted by actors and actresses. The general ideas on this instrument are influentially expanded in this album, so there are other moments in songs that could particularly surprise you in any other way but you can only find out if you get a taste of the whole album. I recommend all keyboard ideas on this album as much as few acoustic guitar parts (Toxic Rain) by which Inhibitions fulfill and enriches their black metal.

A singer uses mainly roaring-raspy sounding vocals and occasionally deeper ones. Sometimes they create severely-layered vocals lines which sound quite confident along with lyrics...

Drums are played either way – I think they wanted it sounds like in bands that used to play very old style of black metal with two pedals but often you can hear them playing thicker sounding drums which depends from variants and expression of music.

Inhibitions have few faster and aggressive songs (No Escape, Religion Of Peace, Rusty Razor), influenced by overall black metal scene but it does not take from La Danse Macabre the identity of the band because the essence of their Greek metal roots is always present in the music.

Closing track is a cover of Satyricon – King, which is not exact representation of this album but more like stand alone song which is always great to hear around. OK then. More or less, you know what you are getting yourself into if you decide to give this album a go which is definitely what you should do.

I really enjoy my time with this dark, magnificent and atmospheric black metal album.