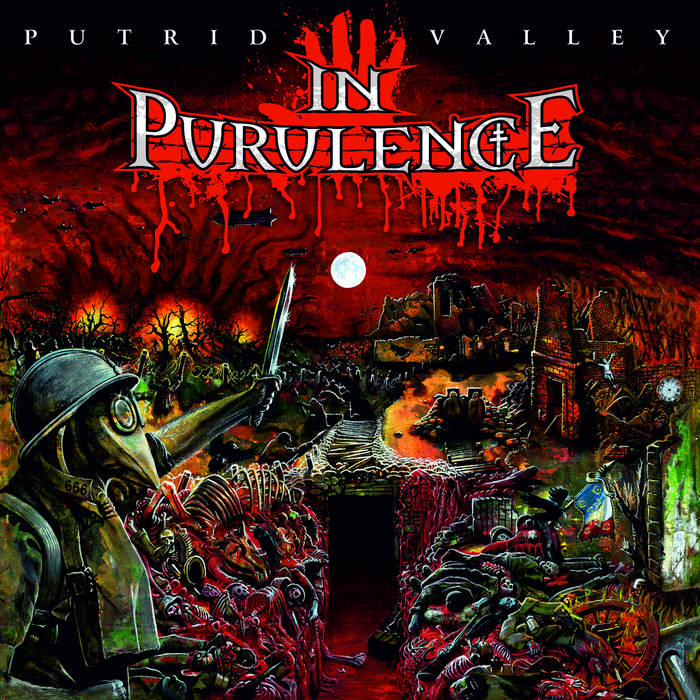 In Purulence is a death-war-themed metal band that is facing extreme metal in France. They definitely deserve your time so you can purchase this very promising album. They were formed around 2014 which still make them quite young band but I do not think In Purulence is for those guys their only occupation. It`s because they are good with their instruments and you have all opportunity to have better time with death metal album as I have had with this one.

First of all, death metal vocals in this album are fantastic. If you are into growls a`la Kam Lee from ex Massacre or Karl Willets-ex Bolt Thrower then you may rediscover your old excitement for death metal that might just has began to circulate in your blood stream, if somehow you have it forgotten. I like how Kildengaard – a vocalist, takes his time to articulate his deep voice and breaths killer death vocals with words that he roars. He has that perfect vibe for death metal band that I have no trouble to adapt to.

Some of the music is also relative to Massacre`s From Beyond and of course, you also can sense some war guitar riffs of Bolt Thrower, a sound nastiness of Autopsy/Demilich but Putrid Valley has not that good production as some albums of these bands. The production is more viral, obscurely low-tuned, maybe a bit as Suffocations`s Human Waste but better. Of course, all those music similarities are my free interpretation of their songs but I can`t and I do not want to get rid of the feeling that this album has a spirit of those classic death metal albums and bands. I do not want to fight this impression because I meet my needs of extreme music in albums like Putrid Valley. In Purulence is the band with a common sense of playing death metal as some of mentioned bands do or did. Putrid Valley is on the same death metal path; waving hammer-punching riffs right towards your head and splatter blood on your face with menace upon brutal death metal songs. It is not fast album overall but I find it better when they operating within middle range tempos which is kinda heavier.

No favorite tracks this time but definitely each song have its moments and I could not say that each one is the same. So I think it`s good.

I`ll be more critical with these last sentences because I like the music and I wish they could have done the recordings better. I mean, with much better sound and mixes this album could hypothetically reveal its real, powerful side. Hope the band can fix it with next release...