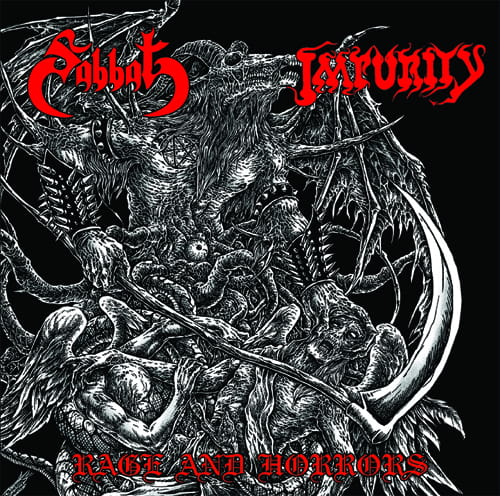 This is a split release from two, very old bands. Impurity from Brazil, founded in 1988, goes first. Their music is primitive black / thrash metal. Vocalist of the band sings with slime, visceral, grunting growls. Songs feature wild drum blasts and very simple guitar arrangements, including lame and sloppy solos, which are the opposite of creativity or craft in music. Seems that primitive, amateur execution and “catching the moment” approach is what they naturally achieved here. Impurity plays either very fast or slow, old school metal. They improvising with songs a lot but they do no pay much attention to quality of music, so, in result, production of their songs is rough and music is very in your face. I admit that songs of the band reminds me of the legend of the Brazilian scene, Sarcofago, which means that I am quite content with the spontaneity and sincerity of Impurity songs that sound authentic, but  not very original. I think Impurity draws too much from albums such as Rotting and Inri, yet you should understand it`s okey with me to perceive their music that way.

The second band with gray beard (formed in 1984) is Japanese Sabbat, which alike Impurity plays old sounding metal, but more in their own original way.
Sabbat, even with the simplicity of their songs is a creative band. The songs have more melodies, more elaborate guitar arrangements, more expressive vocal lines, and a kind of heavy metal feeling to both music and singing (Black Metal Horses). The guitar rhythm, in many parts is quite ordinary, in style of old school heavy black and thrash metal (Kamikaze Bomber), but distinct tone of bass (I like it particularly in song Rage Of Mountains), and above all long lasting, super cool guitar solos, is what attract my attention to their songs. The samurai blood and identity of Japan is very easy to capture in kind of, old fashioned heavy metal song Nekromantik - you know what, in Europe you just don't play melodies that way, which is why Sabbat, for me, as a person from old continent, they play original songs. But wait, there is something every black metal fan should quickly associate. The song titled 3 Candles sounds a bit like a tribute to Bathory, which I recognize by some riffs, similar sound and by the song title of course.
Sabbat is flesh and blood old school metal band from Asia, and through experience of listening to their music you can sense that. They construct songs the way that I do not feel that I listen to the same sounding tracks over again.  If anyone has any idea which releases of Sabbat are worth to spin, please let me know because their catalog is huge. Meantime, I recommend this split - Rage And Horrors, out by Polish label Mara.
​Tracklist: