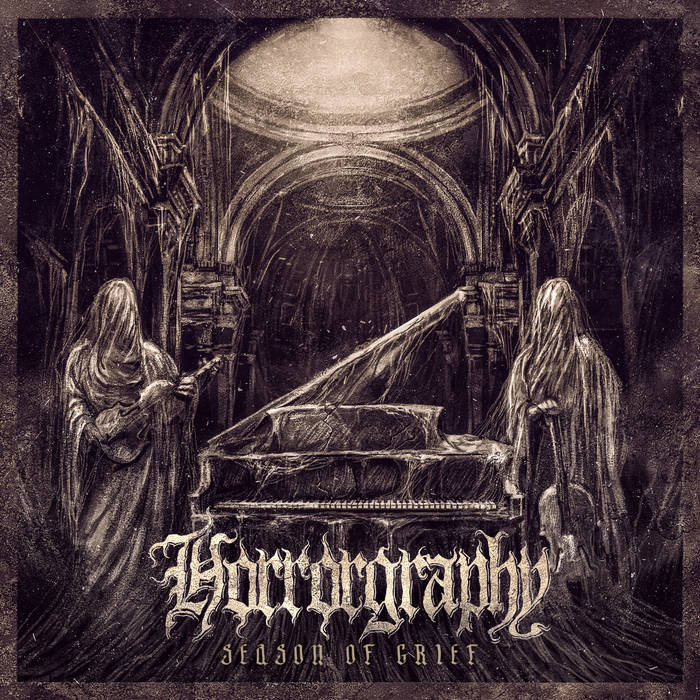 Horrorgraphy was formed in 2017 in Athens/Greece. Their line-up is quite peculiar because of 3 vocalists they have in the band. The fourth and only person who plays on all instruments is Dimon`s Night . You may know him from other bands like Humanity Zero, Inhibitions...

The album has the expressive features of symphonic music, which the band tends to create by using synthesizers, keyboard and few other instruments. On the basis of metal sound, you can hear that Horrorgraphy likes to face slow, doom songs; In A Dark Times, Her Violin Sings At Night, S.O.G... They also find a use of little death metal in track The March Of The Dead. There would be nothing surprising in this album if not for a wide variety of vocals. Those moments when the band uses a combination of female sopranos with a deep, male growls sound very theatrical and operatic. A singer with clean vocals always finds a way to give interesting angle to his own voice as well. The music on this album is temptingly attractive and has long moments and even songs that make the ideas of this band significant and very special just for them. Many arrangements for the keyboard are carriers of an amazing atmosphere, which mixes grotesque and bizzareness, almost as in the era of Baroque music. Just incredible to hear it all and let your emotions to get manipulated for a while.

The studio production of the album is more underground and has no much splendor of Therion super productions but it has rather little influence on how I enjoy this album musically.

For me, the most important thing is that Horrorgraphy finds its unique ways to interest me in their music. This is thanks to incredible sopranos of Marialena Trikoglou and spirituality of music. Of course, the presence of Greek metal is here and waiting for you to be heard but in some sort of comparison, I would say that their music can give you much more feeling and vibe from 1920`s Nosferatu movie than anything else that you can hear  in modern film or music productions. If you are interested in scene from Athens a bit, you know that ancient spirit of that country and old school metal for Greek metalheads has always been important for them and so is for Horrorgraphy in this record...

Season Of Grief is simple album but has something exceptionally magical and dark. Best example are tracks Ghosts and Haunted... These are really great and original songs that telling stories a bit like in musicals or on the stage of the theaters. I can hear amazing vocal ideas and narrations in this album and I really can`t get enough of it. All orchestrations and symphonic elements just intensify the impression of theatricality and emphasizes the beauty of drama in their music.

Season Of Grief is very original album without a doubt. Horrorgraphy has their own vision on their own songs and who knows, maybe they showcase the future of metal which has more in common with artistry than usual noise.