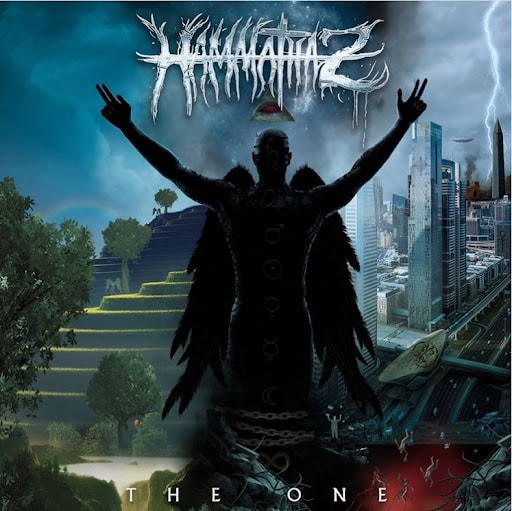 If I am accurate, it`s a first album of Brazilian Hammathaz, released after many demos, singles and Eps, and it took them around 15 plus years to record a full length album.

Initially, I found it hard to connect to their music because they are a bit frantic with their songs, but eventually, it happened that there are few elements that seem fine with me. They are as aggressive as they are brutal, which is a first plus. They balancing chunky death core riffs (guitar breakdowns, drilling shreds) and metal core, where metallic pitch of bass and drumming sound pretty distinct, which is fine too. It`s not the kind of the band that has a catchy songs, they are more centered on hooks, and some of them are good, some do not matter that much. They remind me rawer version of Fear Factory at times (bombarding double bass on drums and mechanical guitar riffs), the difference is that Hammathaz does not sounds so clean and rather no futuristic as their more famous colleagues. Brazilians play powerful and intense music, thrash and death influences are there, but their songwriting is sometimes weird, and I mean, some guitar arrangements are. I am glad that they opened up for melodies in many songs, so even if music is brutal and aggressive, melodies improve reception of their songs, which is a second plus of the album. Some guitar groove in heavier sequences make them sound a little more loose - not critically tight as majority of the music here. There also are some tiny tribal influences in drumming that are comparable to Sepultura, from their "Roots" times or so. I have one absolutely favorite track of the album that comes with these elements and its title is Self-Chained. I think everything work in this particular song, music ideas and dynamics are exciting and there is kind of chemistry in it. It`s good reason to enjoy it. The other cool track is Irrational Beings, in style of Meshuggah, but quite frankly, the album has it`s ups and downs (particularly in a middle part of the record). One more song worth to mention is The End where death/metal core meets classic metal riffs, the thing is that vocalist sings too extremely here, while music itself needed something else...So, as you may assume, my feelings about the album are mixed.
​Tracklist: