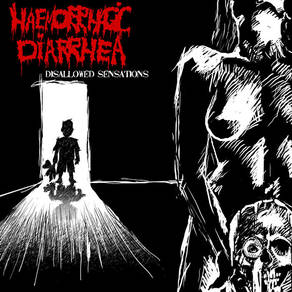 Haemorrhagic Diarrhea is a brand new band from Poland where grind scene is one of the strongest in Europe. This is their debut album for Czech label Bizzare Leprous that is around for long time. The band members have very cool nick names like Cpt.Pervert, Gebels aka Oral King and Master of Abortion. Following this path some tracks may have some kinky cuts from gore, horror, porn, serial killers movies; fine to run a blood a bit faster. I find this album very humorous and that might be that grind and punk connection which makes those songs whistle-able. The sound of the album is also death metal oriented, in fact it is more dirty like Necrophagia records but not the same. It is worth to mention that Haemorrhagic Diarrhea is in the beginning to improve their own sound and as the songs got wiser I am sure I am going to like them more and more. Just listen to Drugged through Homemade substances and Dancing with the dead girl and yet another one like Brainstem lasagne, these ones have potential. Instrumental concept in Anal Crescendo with both growl -torture vocals is different but OK. This band has an enthusiasm in what they do and what they should, is keep on grinding and I will enjoy it ever after.


﻿I figured out that to complete the whole picture about the album, cpt. Pervert could answer some topics;