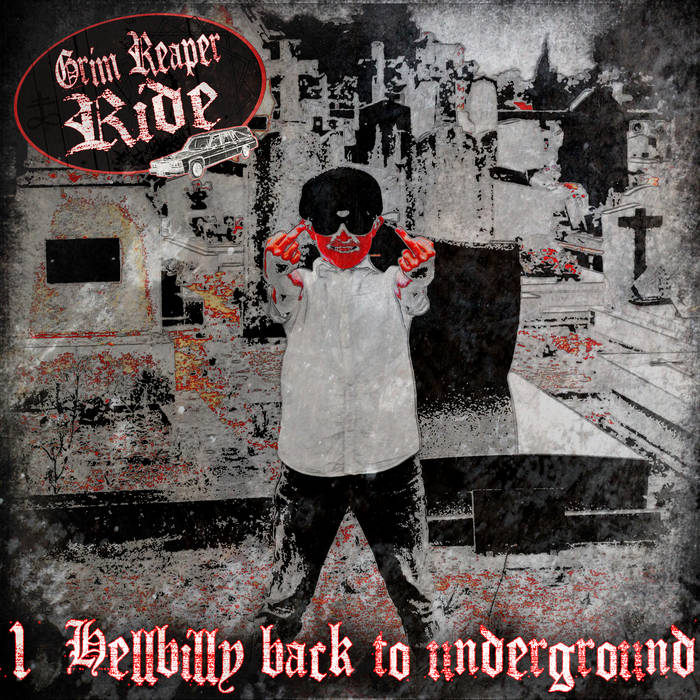 At the end of last year, French guys from Grim Reaper Ride (great name for the band, by the way) released this album for WormHoleDeath,and their music has stuck in my memory, thanks to the music video I have watched, for one of their singles promoting this release.
Songs of Grim Reaper Ride have the feel of dusty rock'n'roll - crust punk mixed with metal, groove, which is based on melodic riffs.Darkly vocals and lyrics take you on the ride to hell and back while simple and rhythmic drumming is quintessential for the catchy style of the band. They grab my attention by spooky stories expressed by grumpy vocals of their singer, and music that is very black & white in terms of character, as if something dead is always near by, hiding in the mist and want to creep you out.The way they play songs, it`s as if they were more grimmer, dark side of Motorhead sometimes but I would not say that they have not their ways to play their songs that sound quite original and entertaining. Many tracks here have plenty of country boogie rock influences (riffs or guitar solos), which showcase that this band has no musical barriers that could stop them to do what they want to, and I like it.

My favorite songs of the album (except to say -I had trouble choosing them because it`s very good record - fits Halloween times pretty much) are Fuck This Day and Dig Deeper (catchy riffs, groove plus choruses and no metal solos work very well as opening tracks). Not bad is a slower, more lousy and moody song, which is Grave Motherfucker Digger with nice dynamics in the end. A rhythmic song for your western stomping feets is Write With Ground where you also can hear that there is some metal spirit in this band when comes to sound. Rock n Roll on Graves is a sick title but power riffs in the song are nothing but reward when hearing them. Another hit of the album is surely the song One For Whole, which is a mixture of everything they do on this album, (country, punk, metal, funky-some guitar play). Another bad ass track is a S/T track that keeps this album on desirable level where my statement is that I already used to the style of the band and those memorable songs they composed here. Also have to write, that to me, the whole album is just a highlight of present times in rock`n`roll, in which Grim Reaper Ride delivers a variety of musical influences and a stylistic balance along with stories that want to be heard.
​Tracklist: