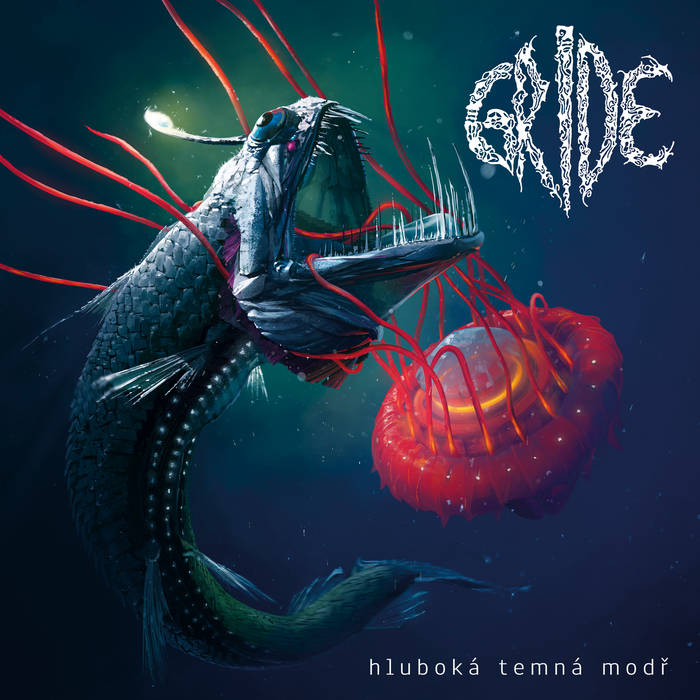 Album Hluboká Temná Modř  (Deep Dark Blue) was released in 2020. Those are the  latest tracks from the band recorded in February last year. Production of songs is done really good - in a way that it`s an instant invitation to music of this legendary Czech grind core band - I've been playing this album non-stop for the last few days.
Spectrum of their music influences is very wide and their songs shall strike you from all extreme directions once the music is already in the air. Gride usually play music very fast, aggressively and brutal,with shorter moments where the pace is slower and music more crushing. Their style emerges from grind core with enormous amount of blast beats and technical guitar mazes. They add elements of power violence, death/punk, schizo/progressive math/death/core to the music so, you surely do not get typical grind core songs from them. Gride is kind of sound like a super crazy band when they play more intricate, and when guitar layers sound weirder, but overall they play  the music incredibly smoothly. In places, their technical approach remind me bands like Antigama and Dillinger Escape Plan. They also have many sophisticated twists and turns in music that they try to do differently. Songs are very energetic, music is often surprising (Few times I was like: I never heard something like what they just played here...) Even those chaotic/noise moments in music seem necessary and so under control of the band. I like hard core vocals from their singer who performs his lines violently, in grind core style but without growls which is rare. Songs 1-7 sound KILLER and I do not know everything about grind core yet but Gride seems to push the boundaries of their own music quite successfully and with imagination.

Back in 2014 they released a split with Sidetracked - songs 8-15 sound very much like Gride. Maybe they play here more technical but it`s still very fresh, original grind core! Obviously, they have had their music style sharpened and defined back then already, so if you like opening tracks from this album you will kill to get more music from them as these tracks too!

Last 3 tracks were taken from older split with Thema Eleven. First song is slower (experimental), second one is very fast (I always like guitar disharmonies in music which is what they did in Neurorevolution, and in other songs too). A bit groovier, alternative and melodic track is Žiletky which is a cover of band Psi Vojaci.

Gride play grind core their own way, songs sound very fresh, in your face and innovatively. I highly recommend this entire album.
​Tracklist: