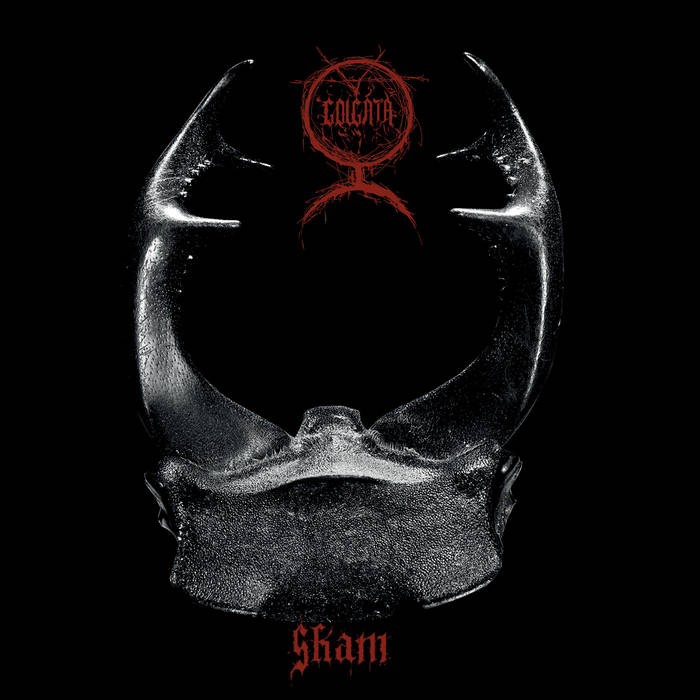 A duo Golgata is hailing from Sweden, which seems a naturist place to play black metal. Skam is the black metal record but has wider spectrum of various influences that are not only coming from metal genre. The band ventures into darker times, quite many times, by planting Viking choirs to their melodic, and sort of epic black metal songs. By doing so, Golgata has created specific atmosphere for their music which sonic-wise can be associated with Viking metal and possibly their culture and beliefs. The songs have some guitar melodies and atmosphere, rooted in Scandinavian metal that strengthen my cultural affiliation - my inner-self with Scandinavian countries through the music I have been listening to for such a long time now...
Those most heart-warming tracks of this album are 1,6...but the band does not seems to escape from more harshly sounding black metal songs and those better ones are 3,5,7...However, the climaxes of the album are well cantered between playing aggressive and atmospheric of which, that second aspect in their music is more mature and natural, surely sounds greater.
There are 2 elements of this album which I do not find particularly interesting or done to what I would expect from this black metal band. First of all, I do not like blast beats which ruin atmosphere in some parts of the album. Second, the sound of drums is a bit off – feeling that something is not as it should be, like a sound of drums in this shape does not belong there, really. So, Golgata has a little bad habit that I do not like, to wake me from my dream about the music they create, when Golgata is playing those unnecessary, very fast drum beats, which I am against in their songs. Vocals and guitars sound is quite okey, although it could still be done better...

It`s definitely a better album than it is sometimes let down. I like majority of music, I think it`s the band with potential. I send my recommendations about Golgata to fans of Bathory, Viking metal and atmospheric, melo-aggressive black metal...
Tracklist: