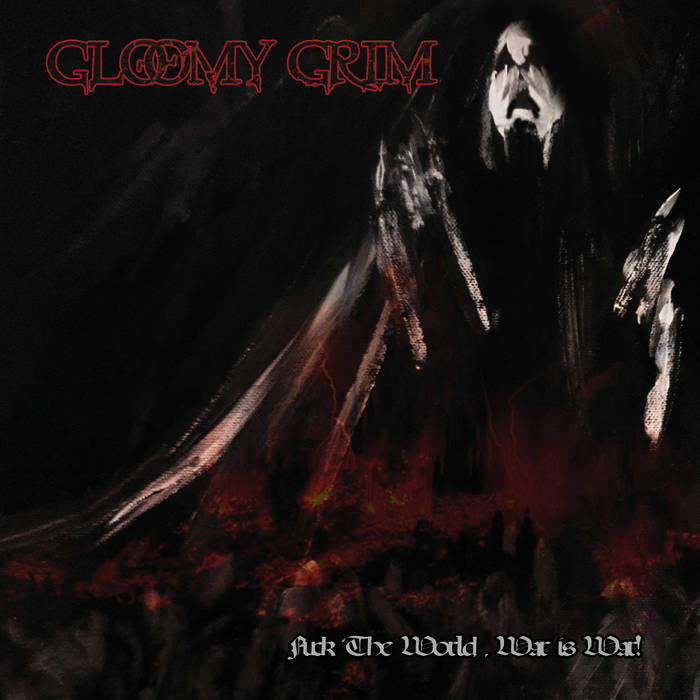 Gloomy Grim has a long history which started off in 1995. Since then the band has released number of albums, EP`s demos, singles and such. The person who is involved in project from the beginning is Agathon who has turned this dark entity into regular band eventually with full line up. It wasn`t always like that because his very first steps he has made for Gloomy Grim was only actions of one man band.

Fuck The World, War is War is retrospective release of their two demos which one is called Fuck The World, Kill The Jehova! (released back in 1996 and Agathon has played all instruments in it). The other one was out under the name Friendship Is Friendship, War Is War!, released In 1997, this time with supporting musicians.

Originally both materials were available on cassettes, as it was typical thing to do in era of demo tapes. Now, both releases were re-released on cassette in 2017 by Carvetii Productions and on CD by Symbol Of Domination, Murdher Records which is very cool because I`ve never heard their music before, even if I mind the band` name since the 90`s.

From countries like Finland comes most evil, antichristian records of all time (...Impaled Nazarene...) and Gloomy Grim is also one of those small underground bands that has made their satanic image been seen and music being heard – not on big scale but, you must give them that they have their devoted fans and followers of black arts!

Fuck the World, War is War is black metal but very niche, cave sounding but it does not have fucked-up quality or anything like that. It`s just raw, small budget sounding records and that`s it.

They play very basic guitars and drums but the best of the band are definitely good, horror making keyboards - very atmospheric one with dose of macabre, avantgarde and those with theatrical suspense in climax of the music. Some of it could be in well use to some silent, classis B/W movies about Dracula, in my opinion. The other aspect important for Gloomy Grim are raspy, dark black metal vocals and lyrics full of vengeance, hatred against religion and weakness. These are exactly vocals and keys that are essential for this record. The darkness takes the best of shapes in songs like Temple Of Agathon (marching drums and bells), Written In Blood (hunger for blood and victims), Asylum (to my surprise the song is even little melodic, has a guitar solo and some doom metal keys). War/Ashes and Blood are ghostly haunting songs and they tracked down some fine, operatic female vocals.

No speed, no brutality of music here but very strong message in lyrics. This compilation is about atmospheric black metal and darkness –Gloomy Grim it is.

Line up for Fuck The World, Kill The Jehova!:
Agathon-all instruments