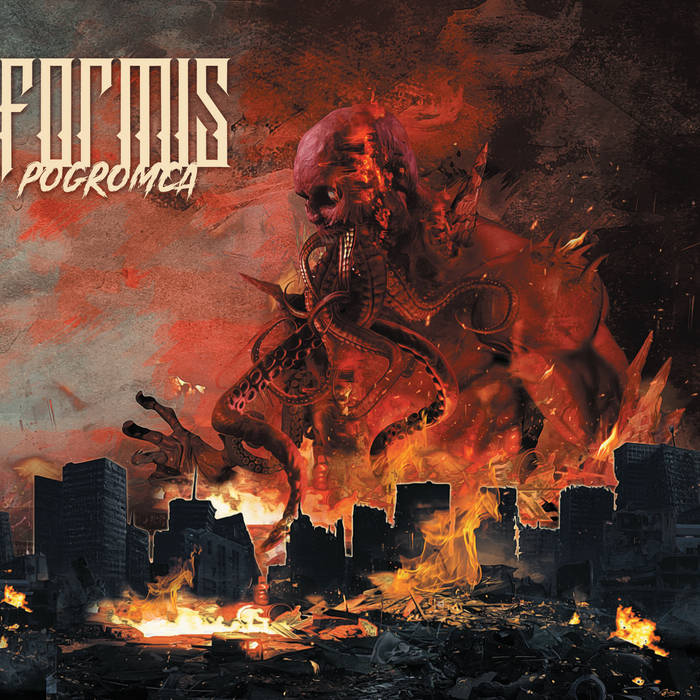 Nice beginning played on the violin, and moments later Formis already reveals the beast that lurks in their new album Pogromca. The havoc is already starting to happen in that fast, intense song Gargulec. The band genuinely combines thrash metal aggression and death metal brutality with complex but easily digestible arrangements. The variety of vocals performed is impressive - aggressive roars/growls and melodic vocal lines are signs of modern times in Formis music.
The band does not let go of technical equality in fast and still fast track called Bunkier, in which the multitude of ideas deserves the recognition of connoisseurs who like intelligent structures in metal music.
Czergid is a ruthless thrash metal hit, with singer's devastating death metal roars, crushing riffs and guitar solos. The band uses choruses on the album, so the songs are more lively and melodic, but brutal in its thrash roots.
The title track is the artistry and shows off the talent of the guitarist who is playing excellent solos. I really like killer riffs when the words ... Conqueror of This World ... are sung upon.
Formis plays perfectly cohesive metal, which can be heard in another strong song of theirs, called Last Breath. This album is intense, dark and brutal in its own way, but also melodic, so something for everyone. There are a few riffs similar to DEATH in this song and in one of a next that is coming, after but for me, Formis has its own style that has been worked out on the previous Chaozium album.
The record-Pogromca does not have any weaknesses if you asked me. Another bullet into your head is the song entitled Antysymbiont. This is best quality Thrash / Death metal to my ears and the band can be proud of first-class performance that they managed to have on the album.
The song Pokutą Będzie Śmierć is a very distinctive piece of the record. Excellent riffs, guitar rhythms and solos. I can sense that the guitarists, vocalist and drummer did their best to lift their music into orbit, close to perfection while they stay extreme and sophisticated at the same time . I am sincerely impressed for the commitment, anger and rebellion that Formis brought to the creation process of the songs.
The piercing screams in Przeklęty and more death metal attitude of the band in this track are just fucking amazing. I am excited to listen to this album.
Brzask is just a short outro, similar to the one from the beginning of the album and I don't want to sweeten the record no more, so just take it for granted - this release is a must!
​Tracklist: